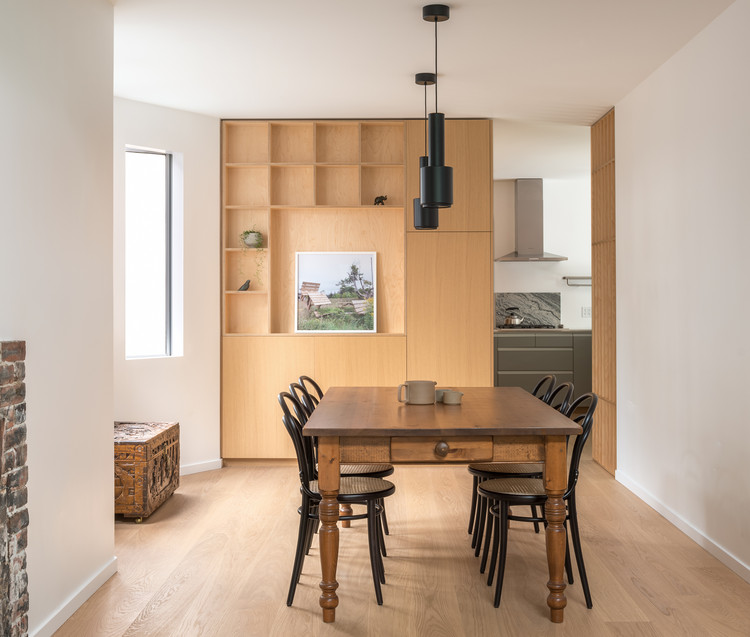 Text description provided by the architects. Yew Street House is a traditional Vancouver house that was renovated to suit aging in place. The project was executed as a collaboration between Vancouver design firm Campos Studio and Toronto based industrial designer Tom Chung. Yew House is situated on a small corner lot in Kitsilano, one Vancouver’s original working class neighbourhoods. Originally built in 1907, the house underwent a patchwork of renovations and in the 1970’s most of its land was sold off to accommodate a neighbouring development. Due to the sale of this land it is now impossible to build a new house on the lot. Therefore, the plan became to upgrade the existing house by gutting it down to the studs, reinsulating and seismically upgrading the shell.

Having raised their family in this walkable neighbourhood the owners wanted to find a way to renovate the house to suit their transition to being semi-retired empty nesters and through retirement to aging in place. The plan became to create a bright modern open loft style living area with an unobtrusive and private guest area for visiting children and friends. The previous attic den was converted into a master bedroom and ensuite loft with hidden storage while the ground floor bedrooms are now a self-sufficient guest area connected to the main living space through a concealed door in the kitchen millwork. The main floor was designed to be convertible to one level living by anticipating the eventual conversion of the TV room and powder room into a master bedroom so that the couple could age in place.

Finishes were kept hardwearing and timeless throughout. The floors, including the stairs, are European white oak. The millwork is a combination of Oak and Baltic Birch. The ceiling was braced with black metal turnbuckles which echoed the black metal screens and metalwork. During the demolition, an original fire place was discovered hidden behind drywall. It was restored and helps to define the dining and living areas. The project includes a number of custom lights by Tom Chung while the furniture is a mixture of client owned vintage pieces and contemporary design pieces.