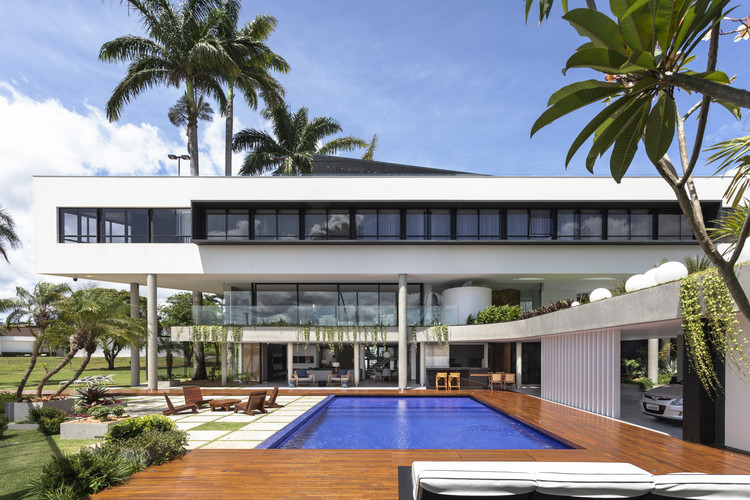 Text description provided by the architects. Built in the 80's, in a mixed structure, the 950m² residence is organized into three floors, which are distributed between the intimate area and services on the lake level, social area on the street level and private area on the third floor, containing five suites. This floor, arranged in triangular plan, is suspended, structurally independent of the rest of the house, also marked by the closing in structure of metallic profiles and apparent bricks. In 2017 the residence was acquired and required an intensive intervention given the degradation due to lack of maintenance. As soon as we visit the property, we identify immediately with its forms and concept.

We immediately defined that the intervention should reveal the original design of the building, given the incontestable strength of its architecture, and adapt it to the present time. The floor that extends on the level of the lake was where the intervention was more intensive. All the walls have been removed and the kitchen, dining, living spaces, in addition to a toy library, fully integrated. The laundry room and a suite of employees are detached from this pavement. The basic premise in this area was to intensify the bond with the lake by leveling the floor that extends to the new pool area framed partially through a wooden deck and a table-shaped garden where the quadrants alternate between grass, and flowerpots of different heights.

A gourmet space, with a barbecue grill, is arranged between the kitchen and the pool framed in a concrete box. The same box repeats folded inside the kitchen containing the refrigerators. Among these two boxes were installed four sliding glass panels that open, allow the space to remain fully integrated. In social access was arranged a large curved wall that tangents the staircase and leads to an atrium that gives access to the social area and the suspended garden. In the second floor the interventions were punctual as the replacement of the corpses by a brise of wood, white color, that extends in the gap among the two floors.

To enhance the oval volume of the toilet, we created a coating in the cabinet area that simulates a large wooden cube by contrasting with the wooden panel of the other end that houses the bar. All balustrade protections and guard rails have been replaced by glass planes to maintain assembly design and volumetry. The external volumetry was maintained with the care of recovering it in the least invasive way possible. All concrete volumes were restored and the large triangular volume had its intensified (highlighted) prismatic shape with the lining and external walls coated and painted in white. This decision intensified the linearity of the windows in black glass, assuming the shape on tape.

To counter this linearity was added a mask, metal structure in black, which functions as a brise thus filtering the morning sun in its warmer period. About the original Project, the architect Sergio Parada comments: "The rectangular geometry allowed to constitute most of the spaces to the east with view to the lake. The project predicted that the view of the lake would not be impeded by the construction of the public road users. Micro internal climate, created through the grandiose emptiness with garden made possible the integration of all the environments of the residence. Colored metal structures and the free form worked concrete defined the design and the aesthetics of the building. " 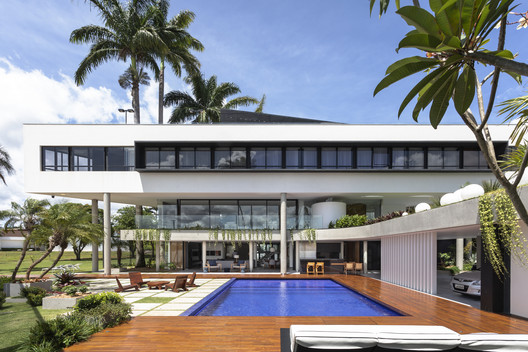