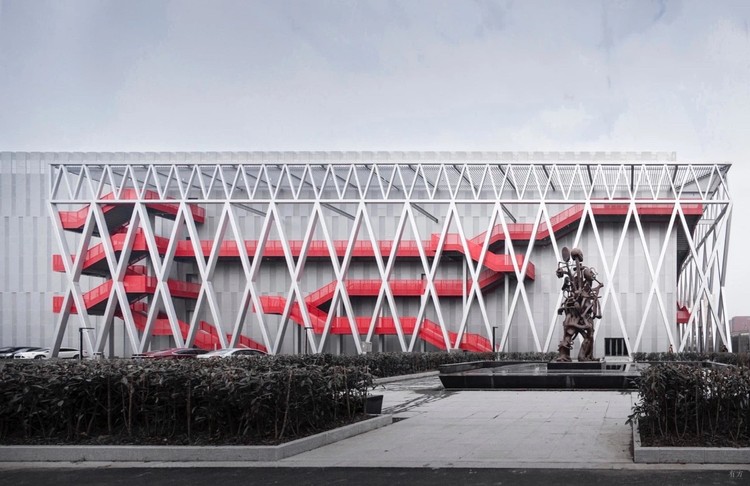 Text description provided by the architects. STANCE, an American sports fashion brand, is featured for its brand declaration of The Uncommon Thread, aiming to make socks, the most common items in people’s daily life, excelsior. STANCE’s Punk & Poets culture attracts a large number of sports stars and leaders in the fashion industry, and its major partners include NBA, MLB (American Major League Baseball), NCAA (National Collegiate Athletic Association) and Disney.

The New FUTURE STITCH Smart Factory is located in the economic development zone in Haining, Zhejiang Province and was completed on October 12th, 2018. This modern factory of 26,800 square meters is the only professional production base of STANCE all over the world and will radiate its range from socks to all types of sports related products. Based on the production progress and logistics requirement, the design features a distinctive scheme - it’s also an art gallery.

Requirements of Smart Factory
Taylor Shupe, the founder of STANCE, studied at the Johns Hopkins–Nanjing Center (HNC) for one year and has quite deep understanding of the Chinese culture.

Taylor expects that the Smart Factory can be more than just a production base, but also equipped with architectural concept that matches the brand inspiration- The Uncommon Thread. He imagined a creative and artistic factory with a deep sense of belonging and pride. With a large number of artworks, abundant sport areas and outdoor gardens, STANCE provides its employees with enough space for daily activities and experience. Avi Cohen, the Chief Technology Officer (CTO) of STANCE, is a senior expert in the hosiery field who pays great attention to technical details. From the very beginning, Avi, with a lot of experience in the technological process and production industry, has defined the specific design conditions such as the equipment layout and the scale of the space.

Design Concepts and Strategies
The idea of stairs is inspired by the Maiji Mountain Grottoes in Gansu, China started from 384-487 A.D. and The Centre Pompidou completed in 1977 in Paris.

FUTURE STITCH will add 500 hosiery machines in the next three years with an additional annual production of 60 million pairs of socks. The rapid development of the enterprise will bring about the changes in the space requirements and the adjustment of functional blocks, which means organizing the auxiliary circulations such as evacuation stairs and corridors at the outside of the workshop functional blocks to make sure the integrity of the production workshop, providing flexible space for the further development of the brand. Verandahs make it possible to adjust evacuation egresses in the future, while corridors and stairs become temporary outdoor playgrounds for workers.

The east and south facades of the building feature the unique system of outdoor stairs and corridor circulations. The interior space of the factory has a special visiting circulation corresponding to the manufacturing process, which runs independently from the lobby and connects every production workshop located on each level, exhibiting the modern manufacturing and logistics process from the storage of raw materials to the completion of the packaging. The visiting circulation stays at the triple-height STANCE gallery in the central factory for a while, and finally reaches the basketball court and rooftop garden. The organic mix of production workshops and public art space emphasizes on the brand promotion of STANCE and welcome a large number of visitors.

Workers’ commute circulation is concentrated on the south side of the building. After changing clothes in the locker rooms next to the entrance hall on the ground floor, they can take special elevators up and down. Most of the workers will reach the production workshops on each floor through outdoor evacuation stairs and corridors. The simple design of the red steel staircase and the flow of commuting workers on the corridors and stairs creates a warm production atmosphere with a sense of ritual.

The main entrance hall of the Smart Factory faces the main entrance on the east side of the factory, serving as the administrative management entrance and guest access. On one side of the entrance hall is an independent design and development center where the development of the next generation of STANCE production remains highly confidential. Through a long corridor that leads to the second floor from the entrance hall and the two-story packaging workshops, visitors can reach the triple-height STANCE gallery located in the central building. The visiting circulations of the gallery and the three-storey workshops on the east and west sides of the factory combine spontaneously from bottom to top, creating a visiting experience of being in the alternation of the production process and artworks. Eventually, the visiting circulation leads visitors to the basketball court that can also serve as the stage at the rooftop. One day, you probably could encounter an NBA superstar or enjoy some concerts here in the future.

On the large wall of the gallery that faces to the east, there are 100 portraits of workers took by photographer Luo Yuqian, expressing a power of silence in contrast with the artworks that surrounds. Those in the photographs are the real daily user and also the spirit of this space.

Structure and Space
The supporting structures of the outdoor stairs on the east and south facades are connected by V-shaped steel frames to form an enlarged rhythmic weaving texture, establishing an intrinsic formal relationship between the structure and the identity of the hosiery space. The large-scale sculpture on the southern square of the building created by Zio Ziegler, an illustrator from California complements the façade elements weaved by architectural structure. And another mural painting on the other side of the gallery by the same artist continues the mysterious pictographic traditions influenced by aboriginal culture, serving as another manifestation of The Uncommon Thread. 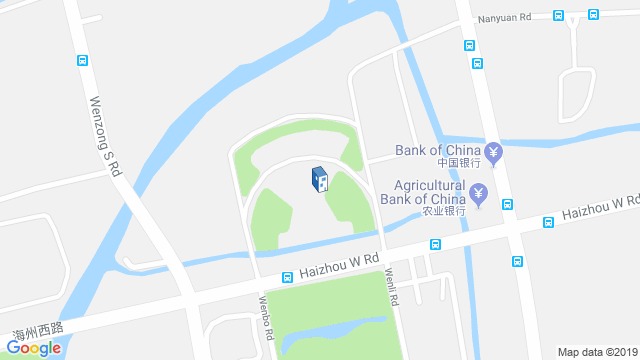 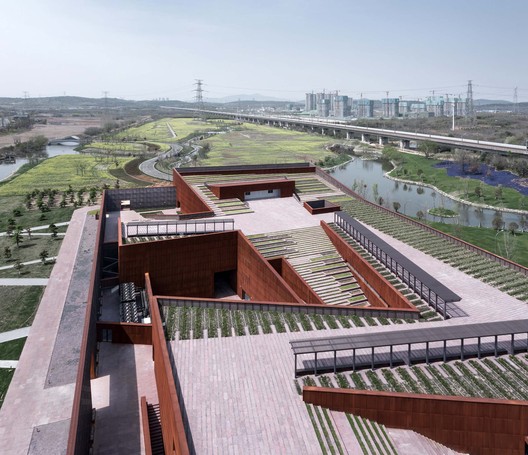 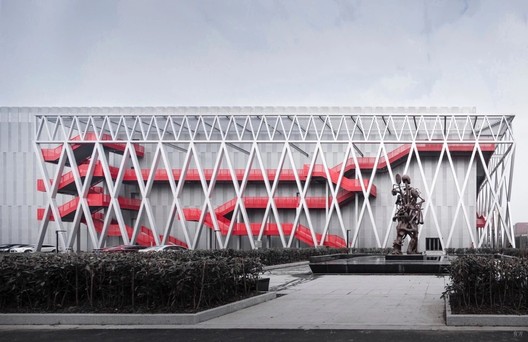