It is often claimed that “there is nothing more outdated than science fiction.” Indeed, history is awash with speculation on future ways of living, as futurists imagine how advancements in technology, trends, and social norms could alter how we live, and what we live in. The period between 1958 and 1963 could be described as “The Golden Age of American Futurism” where technological milestones such as the founding of NASA coincided with cultural icons such as The Jetsons. Some of this era’s wildest ideas centered on how the houses of the future would look. 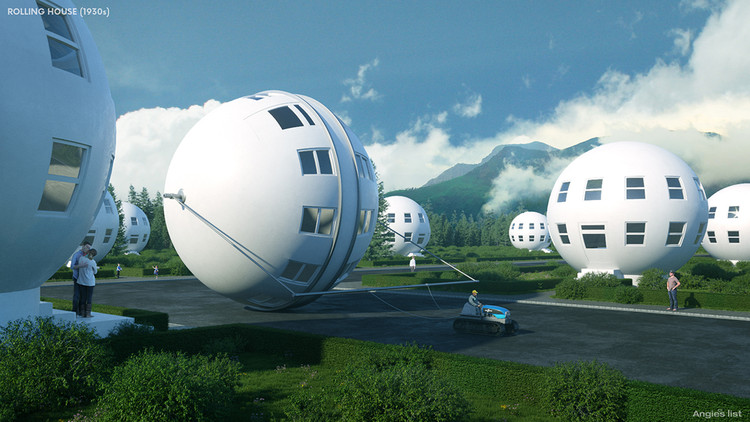 Below we have republished the seven ideas for your inspection. For a more detailed description of each idea, visit the Angie’s List publication here. The collaboration follows on from similar previous endeavors by NeoMam, who recently speculated on what New York’s Central Park could have looked like, and seven rejected proposals for Sydney Opera House.

Angie’s List: The September 1934 issue of Everyday Science and Mechanics assured readers that spherical houses would soon become highly fashionable, even if the appeal of living in a giant hamster ball isn’t immediately obvious. The innovation was intended to make the remote construction and delivery of new homes more straightforward, as traveling in the ball would be a bad idea if you valued your crockery and ornaments.

Angie’s List: Utilizing a special new kind of glass designed to admit the ultraviolet, ahem, “health rays” of the sun, the Vitaglass house would offer a year-round summer thanks to the addition of mercury arc lamps for gloomy days. Like all the best new architectural innovations, Vitaglass was first tested in the monkey house of a city zoo. But even plain glass was controversial during the interwar years, with worries that its new popularity would discourage people from ever going outside.

Angie’s List: General Motors created the Futurama II Pavilion to blow the minds of visitors to the New York World's Fair in 1964. While the rest of the world was staring at the stars, GM noted that we still have whole oceans that remain unconquered. “Our new knowledge and skills — new power and mobility — have given us a new and wondrous underwater world,” guide Ray Dashner told visitors on the tour. “A miracle of gifts from the limitless treasury of the sea.”

Angie’s List: The January 1942 authors of “This Unfinished World” offered a vision that gets closer every day: using super-light “aerogel” to create buildings that are earthquake-resistant and require less resources to build. Today, the lightest material in the world is graphene aerogel, which can be 3D printed, and boffins are hard at work figuring how to use the material to lighten the environmental toll of conventional construction techniques.

Angie’s List: The dome house’s ecopunk utopianism took sustainability as its driving factor. The rotating dome would allow homeowners to make efficient use of the sun’s energy. And while hydroponic vegetable patches like those outside the dome house do not yet feature in the average 21st-century garden, the hydroponics industry, in general, is set to triple in value to $725m between now and 2023.

NewsArticlesFutureNeoMam StudiosHouses
Cite: Niall Patrick Walsh. "7 Houses of the Future - According to the Past" 19 Apr 2019. ArchDaily. Accessed . <https://www.archdaily.com/915464/7-houses-of-the-future-according-to-the-past> ISSN 0719-8884 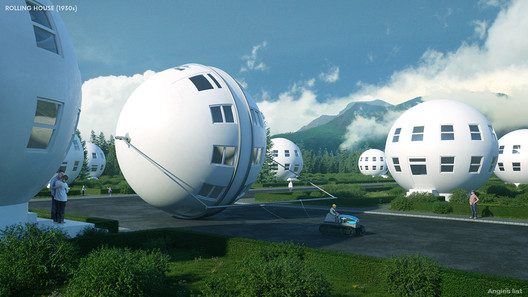