A Green Spaceship appears to have landed in Villaverde, Madrid, in design firm 3GATTI’s proposal for the new municipal library. The design for the landmark building employs the public’s curiosity to draw visitors in and create an iconic presence in the city. The library is split between two floors, both architecturally and conceptually. The ground level is transparent and open, meant to house the noisy, public aspects of the program; the upper floor is the architectural showpiece, floating above the ground and containing the more private, quiet study spaces. 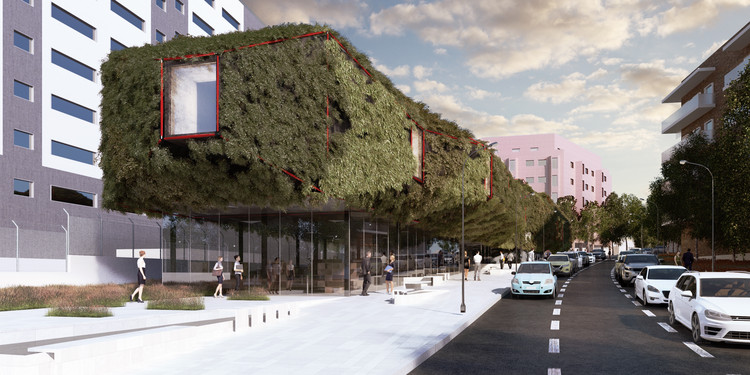 As the true “spaceship” part of the design, the upper floor consists of a concrete and brick base, sprayed with dark plaster, supporting a red tube and metallic net construction. The netting, in turn, plays host to the Virginia creeper vines planted on the roof which will give the building a seasonally-responsive appearance.

In the warm season, the vines grow rapidly and cover the structure with green leaves, shading it from harsh sunlight. In autumn, the leaves will turn brilliant red before falling away in the winter and leaving behind just the now-transparent superstructure. The dark plaster exposed in the colder months will then attract more sunlight and serve to passively warm the building.

The monolithic upper volume is conceptually divided to create an internal courtyard, as well as two that face the back pedestrian street. The walls facing the courtyard spaces are glazed to provide peaceful views from the study areas to the outdoors. Various extrusions in the upper volume hold the net structure away from the facade and filter light and views into the building, while also providing alcoves for private study and lounge spaces.

Opposed to the “alien object” volume of the upper space, the lower floor is instead integrated with its surroundings through transparency and various access points. The street-facing facade of the library is set back to create a larger public space in front of the building. The back of the site is left open to create a pedestrian pathway connecting two neighborhood streets. Interstitial spaces between the courtyards and the eastern side of the site will become urban vegetable gardens, which will be attached to the children’s library rooms to encourage interaction and education.

3GATTI’s goal with their design for the Villaverde library is to create a truly public building that goes beyond being a holding space for books. The library is envisioned as an organism which can interact with the neighborhood in an open and flexible way, sparking conversations about the environment, civic life, and education. 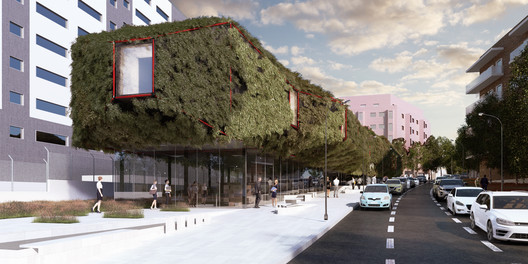