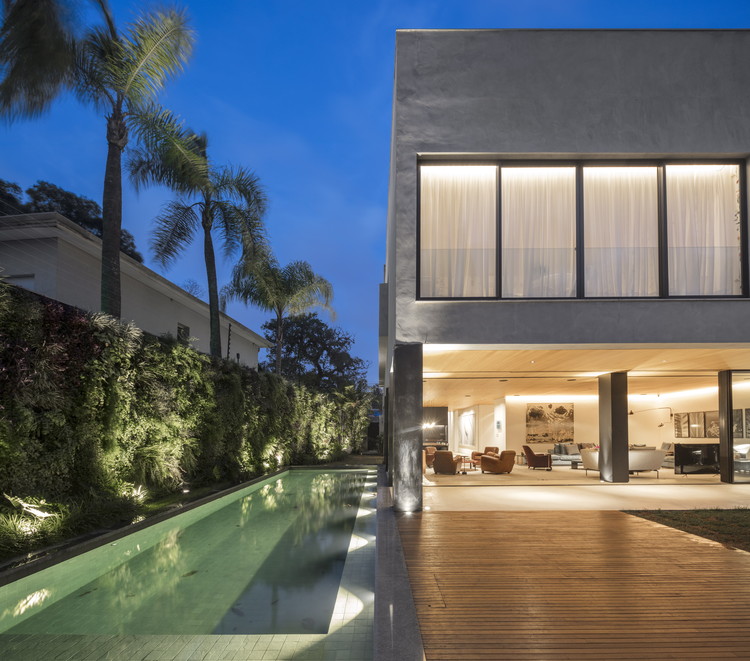 Text description provided by the architects. For more adequate that an architectural project may be, the program that has to be supplied by a construction varies over time, demanding, not a few, functional and constructive alterations. As it happens, with these elegant lines, the 740 m² residence, constructed around the year of 1950, in one of the most noble neighborhoods of São Paulo, recently submitted to a retrofit process, led by architect Fernanda Marques.

“This project was thought to attend a couple and their three children in a growing up phase. Everyone, invariably, interested in receiving guests. A lot of guests.” jokes Fernanda, that, since the beginning realized the necessity of optimizing the living spaces of the house. Even if, for that, it would require structural order alterations.

“They reacted well to the idea of transferring the pool area to one of the sides of the house, with the purpose of creating a new gourmet area. Today, one of the most accessed spaces of the house”, says the architect that did not measure efforts on the endeavor. “In fact it was the most challenging and lengthy phase of the entire project, but it was worth it”.

Not that the other changes did not also reveal itself as being inevitable. Throughout the entire ground floor the openings were enlarged with the means of creating bigger spans and providing a better integration between internal and external areas. With the aim of creating a most flexible layout all the internal finishing’s and dividers were altered.

Today the ground floor holds, exclusively, the social area of the house. On the first floor we have the suites and the home theater, meanwhile on the top floor we have an area dedicated to wellbeing such as fitness, spa and an entirely glass wet sauna. Everything very practical and based on the sole purpose of optimizing conditions of circulation and internal lighting. “All that they wanted was to live elegantly and practically.” summarizes the architect.

That being said, a big attention was held to the lighting chapter. “On the exterior I opted to let the landscape speak for itself. Whereas on the interiors we used a different math,” she explains, that throughout all the spaces the project explored a maximum potential of all the lighting fixtures, such as the pendants, the lampshades and the lamps.  Without forgetting, of course, the use of a soft palette on the finishing’s and the use of natural materials, two of Fernanda’s main trademarks. “Besides being neutral, they are the most lasting”, concludes.