Carlo Ratti Associati, working in collaboration with energy company Eni, has developed an architectural structure made of mushrooms, unveiled at Milan Design Week. “The Circular Garden” was grown from soil made over the past six weeks, and will be returned to the soil at the end of the month. The structure is composed of a series of arches adding up to a 1-kilometer-long mycelium, experimenting with sustainable structures that can grow organically. 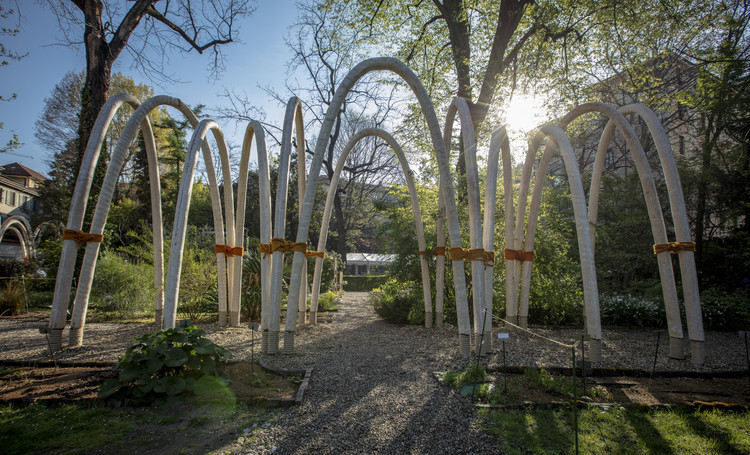 The Circular Garden pushes the boundaries of mycelium (the fibrous root of mushrooms) with a series of 60-meter-high arches made from the material scattered around the Orto Botanico. In order to create the structure, the project took inspiration from Antoni Gaudi’s “inverted catenary” method employed on the Sagrada Familia in Barcelona. According to this method, the compression structure finds its form using suspended catenaries, which are then inverted. The result, in the Circular Garden, is a series of four architectural “open rooms” scattered throughout the garden.

The mycelium was grown in the two months preceding the opening of the Circular Garden with the help of leading mycology experts such as the Dutch Krown.Bio lab. Spores were injected into the organic material to begin the growth process. As many pavilions for temporary exhibitions create large amounts of waste, the Circular Garden charts a more sustainable course, with mushrooms, rope, and wood chips shredded and returned the soil following the end of the exhibition.

Nature is a much smarter architect than us. As we continue our collective quest for a more responsive ‘living’ architecture, we will increasingly blur the boundaries between the worlds of the natural and the artificial. What if tomorrow we might be able to program matter to ‘grow a house’ like a plant? Milan’s amazing botanical garden, in the center of the city, seemed the ideal place for such an experiment.
-Carlo Ratti, founding partner of CRA and director of the MIT Senseable City Lab

Part of the INTERNI Human Spaces exhibition, the scheme will be on public display from April 9th to 19th in Milan’s Orto Botanico.