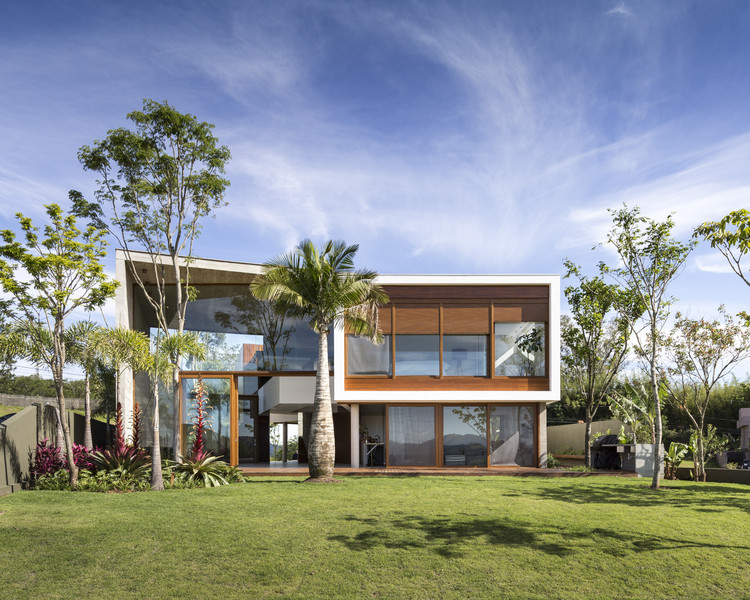 Text description provided by the architects. On a raised lot overlooking a lake, the feeling of privacy and seclusion was the starting point of this 487m2 project. The wish list was specific: the resident sought references to send her back to her homeland in Napa Valley, California. Among items, a bedroom that invite to stay in bed late, cars kept in the background and an inner walkway surrounded by forest.

The architectural translation of these elements was written in a house that stands in three distinct blocks, each representing a different zoning. On the front facade the first one stands, a cube completely covered in wood that shelters the suites of the children and "floats" over the open garage. Large blades lined with pink sandstone, a traditional Californian stone, give support to the volume and protect the main access.

The social space is understood from the entrance into another imposing block, the second, whose side wall and ceiling are in apparent concrete, with a texture that mixes the strength of the material with the smoothness of the wood shafts printed on it. The whole space is permeated by large glass panels that extend through the total height of the ensemble, revealing a unique view of the landscape and the trees of the garden surrounding the property.

The fireplace is a focal point, with a corten steel coating, and on which stands the structure. Next to it, the low ribbon glass creates a clever contrast between interior and exterior, giving lightness to the ensemble and drawing large entries of light that, at the same time, ensure privacy.

The third volume is in white masonry and has two decks: the lower concentrates the service area, kitchen and toy library. In the upper is the double bedroom, apart from the others, with large bathroom and closet. The detachment of the elements set up openings that allow sunlight to bathe the southern part of the house. Finally, interconnecting each of them, a large catwalk optimizes the horizontal and vertical movement between spaces, remembering the movement of a hotel.

The bet on this footbridge sets the evolution of a simple corridor that adds the panoramic view of the second floor through the glass panels. In its structure was installed central air conditioning, optimising the distribution of air and hiding all equipment.