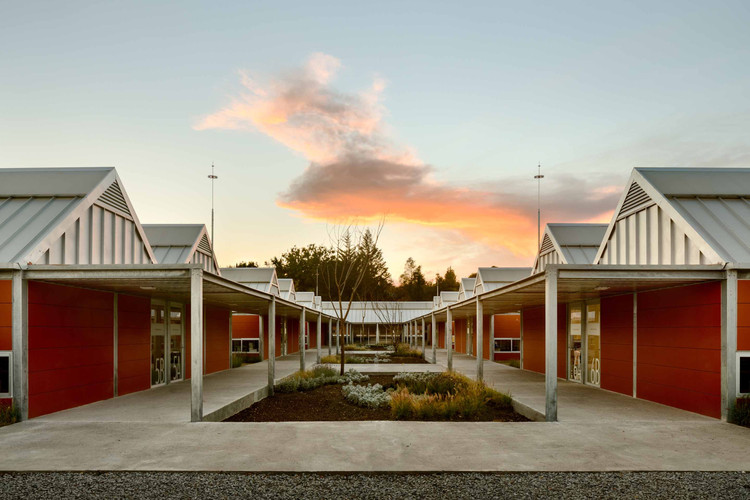 Text description provided by the architects. As a result of the earthquake of September 19th in 2017, with the epicentre in San Felipe Ayutla Puebla, cities and towns in the center of the country were seriously affected. Only in the state of Puebla more than 200 public schools were severely damaged, most of them rural.

A couple of months after the event, we received an invitation from the IENOVA and GDI companies to design the rural primary schools of the communities of Santa Isabel Cholula and San Martín Tlamapa, where the schools had been destroyed. These companies were donors of both projects.

The project and construction needed to be carried out in a very short time, which led to the decision to design it with industrial modular systems. A galvanized steel structure is used as a skeleton, with a module of 3 x 3 x 3 meters, resistant to earthquakes of large magnitudes and usable for all the spaces, including circulation elements. It is adaptable to the different programmatic, geometric and topographic conditions of both sites and is replicable for new projects as well. In the walls, prefabricated lightweight GRC concrete panels were used to speed up and facilitate the assembly, having an interchangeable system for doors and windows. The roofs on the outside are of galvanized steel sheets and laminated glass in the peak of the roof, providing the necessary light for the proper functioning of the spaces during the day. The inside is of wood panels and thermally insulated foamed PVC, providing a warm and bright atmosphere.

The relationship with the site, the orientation, the prevailing winds, the landscapes, the visuals, the vegetation, the topography and geometry of the terrains, were fundamental aspects of the design. There is a transition from the exterior to the interior spaces through wide corridors that function as porches articulating the project. The interior spaces are physically and visually related to the scale of the children, with gardens and courtyards that weave the buildings together.

Bioclimatic studies were carried out to make the spaces comfortable during the majority of the time and throughout the year. The choice of materials, the proposal of a passive system of natural cross ventilation in the spaces, skylight and lateral window lighting minimizing the use of electrical energy during the day, were all derived from these studies. In both schools, the rainwater that falls on the roofs is recovered.

Located in the municipal seat of Santa Isabel Cholula, the new school was built on the same property as the previous one, aligning the new buildings using the trace of the buildings that were affected, and using the axis of the existing court as one of the compositional axes of the whole project. The north-west orientation favours the cross ventilation.

Because of not having relevant views in the surroundings, the classrooms were arranged around a large central courtyard, articulated by the library to create the heart of the project.

The service facility building was arranged parallelly between the existing court and the access courtyard in order to lessen the presence of the court roof in the walkthrough experience.

The buildings that remained standing were adapted for multiple uses, the administration and the computer rooms.

Located in the town of San Martin Tlamapa, belonging to the municipality of Santa Isabel Cholula, the project was built on a site destined for a new primary school.

This circumstance favoured the location by taking advantage of the view towards the characteristic agricultural landscape of the region.

The building is placed longitudinally pointing to the northeast to favour the views of the landscape. The classrooms are grouped in blocks of two modules and these are separated by gardens so that all the classrooms have views towards them.

The administrative and service buildings are located across the width of the terrain to section the terrain in three common areas: the access courtyard, the civic square and the soccer field. 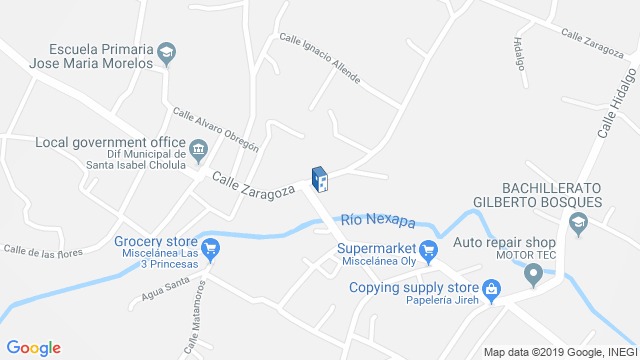