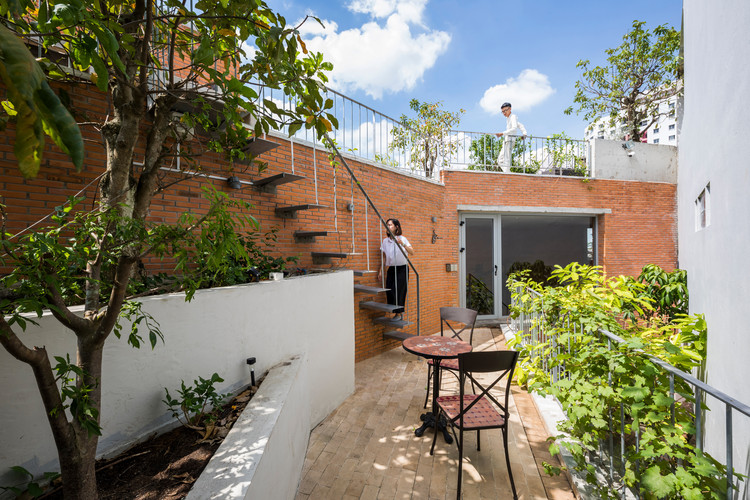 Text description provided by the architects. This is a private house project for the three-generation family located in an emerging residential area, 15-minutes drive from the center of Ho Chi Minh city, Vietnam. The newly built houses around the site form a highly dense neighborhood and they share the outer wall with each other. The site of project is in such a narrow site of 7 meter wide x 20 meter long.

Among such typical highly dense residential development areas in Asia, we decide to propose a strategy of housing that suitable for the tropical climate in which greenery and the residents live intertwined.

The client’s first request is “a large green garden” where children can play and adults can have BBQ with their family and friends. In addition, the residents also expect a big swimming pool, spaces for exercise, a grandmother’s bedroom, a living room & a dining with kitchen, a sufficient parking lot - all on the ground floor. Hence, we have proposed to divide the idea of the “large green garden” into smaller connected gardens.

One continous garden
Specifically, as the volume of the building is climbed from the ground floor, it is gradually set back while twisting. On the top floor, the house is configured to protrude a two meter cantilever to the main road. The stepped gardens of the house are placed interwinely with the terrace as they are connected and continuous to the top floor. Depending on the type of trees, they create an umbrage that filters the harsh sunlight and cool down the air for the house. In addition, each tree pots also functions as a blindfold from the main road.

On the other hand, the terraces are arranged on each floors with variety of size according to function. At some place, it is designed as a private garden that the residents can access directly from their bedroom. While in other space, the terrace becomes the public garden which everyone can gather. All of these gardens are individual spaces that are also "one continuous garden" where the residents and kids can go through by the steel staircase outside.

In the interior space, the ground floor and the first floor are connected by a huge central void. It attaches all of the main funtional spaces such as the living room, the dining with kitchen, the library and the kids’ bedroom to become one space in which the residents can interact with each other. At the same time, through the big openings with different scales and proportions inside the house, the residents can also connect with the greenery outside the house.

Thus, we hope that the house will be a bridge that connect people and people as well as people and nature.

Environmental strategy
The gaps that are created by the shifted volumes allows the natural sunlight and cool wind to pass through. In such an elongated site where it is often narrow, hence we have created such open spaces for the house.

As the direct sunlight is reduced by the greenery on the facade of the house, the residents’ future electricity usage of air condition will also be decreased.

Because of non-abundant budget, we are required to reduce the finishing cost for the house as low as possible. Therefore, we apply bricks as finishes, a method commonly used in the construction sites in Vietnam while at the same time reducing the construction expenses in general. In addition, as the labor cost was small, we were able to control the quality of arranging the brick on construction site. Since brick is also a local material, the carbon footprint from transportation was greatly decreased.

Connect people and people, people to nature
This project is one of the latest projects of the series project "House for trees" which we have been continuing during these past few years. Among them, we aimed for not only to plant trees in houses, but also to create a new type of house for trees which the life of residents and nature are more closely intertwined. 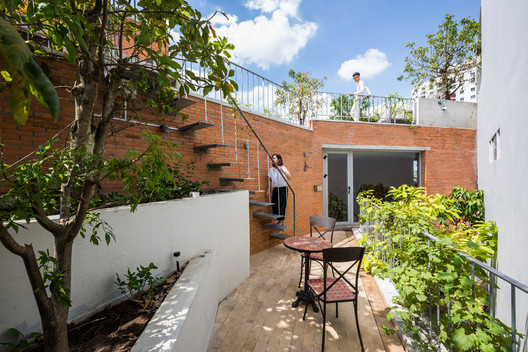