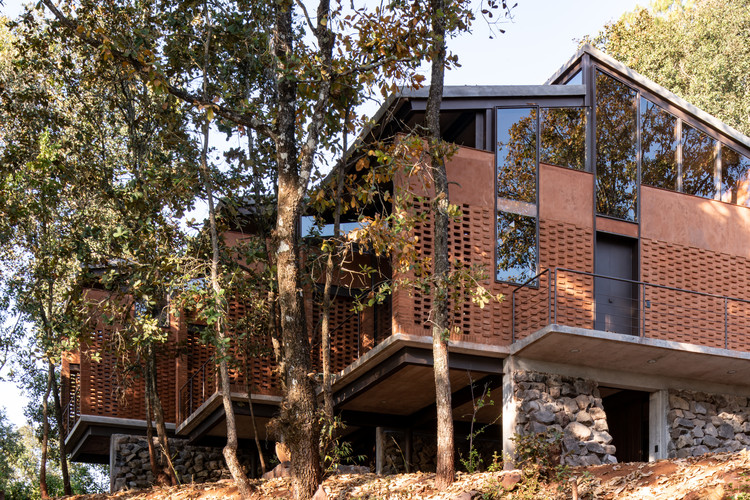 Text description provided by the architects. Casa Zirahuén’ is a holiday house located in a small town of Michoacán called Zirahuén. From de heights of the hills, the project rests amongs the site’s vegetation. The lake of Zirahuén is to the west, directing all the project’s views towards it.

The main goal of Casa Zirahuen’s design was to recreate and reinterpretate the mexican cabin, not only by retaking volumetric aspects but also in vernacular constructive techniques. We made coatings on interiors and facade walls with site’s clay soils named ‘charanda’ and ‘topure’. The arrangement of the stone in the masonry walls of Casa Zirahuén was inspired by the stone fences that delimit the land in the towns that we see throughout the state. The two way inclined concrete slabs cover the interior spaces and extend outward to create shelters also on the outside.

The house is divided into 4 cabins, the largest contains the social program; living and dining room, the copper kitchen, a stairway to a lookout in the rooftop and a cellar area in its basement. The other 3 cabins, house the private program in its first and attics plants, all three of them are connected through hallways on the ground floor and small bridges in the attics plant. Two of the private cabins have a basement floor with a lake view, a bar and a gym with jacuzzi.

The 3 cabins are disarticulated from the main cabin to create a central courtyard, an important meeting point in the project.

The decision to divide the program into different volumes is taken from the search to create interior/exterior walks throughout the site in any direction you take in Casa Zirahuén. One of the routes is the back passage of the private cabins, where the water fonts and rocks dialogue with the concrete roofs that fly to the limit of the masonry walls.

Santa Clara del Cobre is located a few kilometres from Zirahuén and we were fortunate to work with copper artisans to fully line the kitchen and create pieces such as bath tubs and bathroom sinks. At the sunset, the copper kitchen becomes a large amber lamp that illuminates the meetings and gathering in the main cabin. 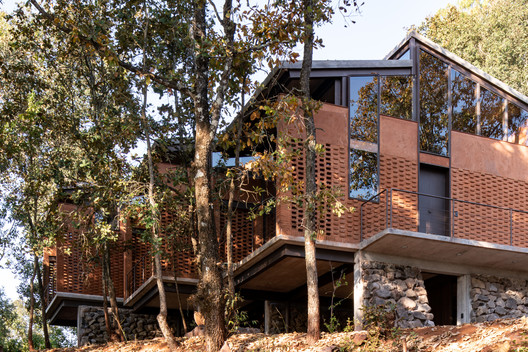