The Council for Tall Buildings and Urban Habitat has announced that Norway's Mjøstårnet tower is, at 85.4 meters, officially the world's tallest timber building. Beyond the unique distinction, the tower is also Norway's tallest mixed-use structure and third tallest building.

This announcement comes in concert with a new amendment of CTBUH's Height Criteria, the guideline widely considered the authority on tall buildings around the world. The new update officially recognizes timber as a structural material, allowing CTBUH to monitor developments in timber construction. Given the recent spate of timber-based projects around the world, this update is expected to be of interest to both established stakeholders and the general public.

“Outsiders may perhaps think that there is great risk involved in using a new assembly method on such a large and prestigious project. However, following many years of development, we were ready to take a new step,” says Rune Abrahamsen, director at Moelven Limtre.

Timber construction is becoming an increasingly trendy option across the world, with projects going up in locations from Sweden to the US to Japan. With the material being used for projects from skyscrapers to bridges, we can expect significant developments in the near future. 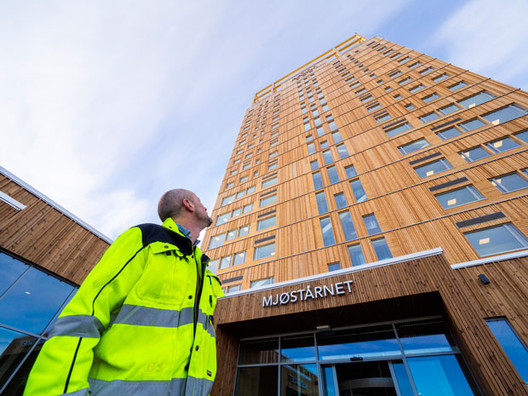