Dutch design practice Mecanoo has created a masterplan for the world's largest man-made nature park at Nieuw Land in the Netherlands. Last month, the Provincial Government approved the plan with an overwhelming majority. The National Park is located near the metropolitan region of Amsterdam and covers over 29,000 hectares. The new masterplan integrates four nature reserves to secure and protect the future of the National Park. 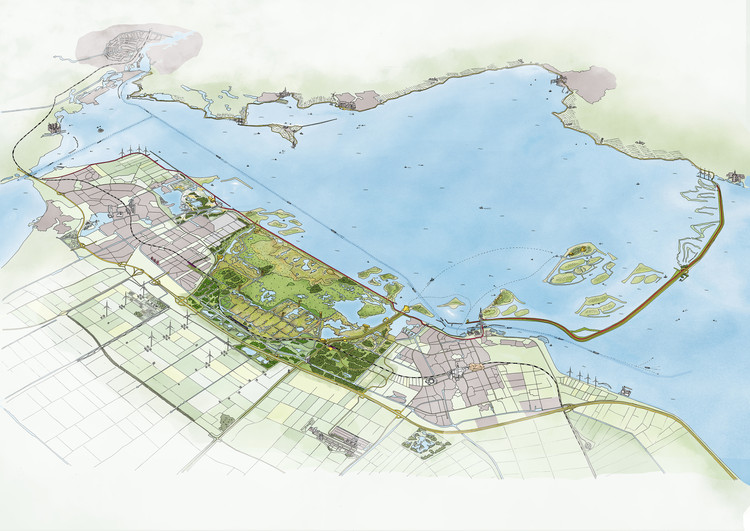 Nieuw Land includes numerous existing nature reserves: the Oostvaardersplassen, the Lepelaarplassen, Marker Wadden and Trintelzand. As the team states, these reserves would never have existed without the land reclamation works in Flevoland in the 1950s and 1960s – it was unintentional that nature was given free rein over large areas of the reclaimed land. Over the next twenty years, the four nature reserves will gradually be connected to form a continuous park. At the same time, Nieuw Land will be made more accessible so that visitors will be able to discover the area by bike, canoe, or on foot.

Mecanoo Founding Partner and Creative Director Francine Houben said that, "Nieuw Land will be a new kind of national park, one in which visitor experience is central. The park will be an attractive and educational experience for all generations and will bring the city and nature closer together. It will feature many dikes, marshlands and reed landscapes, new islands, and even more flora and fauna - with space for rest, darkness to view the starry sky, wilderness, and adventure.”

Nieuw Land is primarily a bird reserve, with dozens of protected species attracted by the ample food supply and sheltered places for rest and breeding. The key nature reserves – Oostvaardersplassen, the Lepelaarplassen, Marker Wadden and Trintelzand – will be enlarged and the connections between them will be strengthened. Adding islands, marshlands, creeks, wet grasslands and water connections will create a continuous ecosystem. The design aims to make it easier for birds to forage in one area and rest or breed in another. In turn, with the proposed Nieuw Land “nature station” (train station), the park will be accessible by train from the Amsterdam metropolitan region and other urban areas.