The New York chapter of the American Institute of Architects has announced “Salvage Swings” by Somewhere Studio as the winner of the 2019 City of Dreams competition. The temporary art structure is now the subject of approvals and fundraising, with the goal of constructing the scheme on Roosevelt Island in the summer of 2019.

The pavilion, to be branded the “City of Dreams Pavilion,” utilizes scrap cross-laminated timber panels recovered from a construction project at the University of Arkansas, repurposing them in an “inviting summer pavilion” featuring 12 framed swing modules. 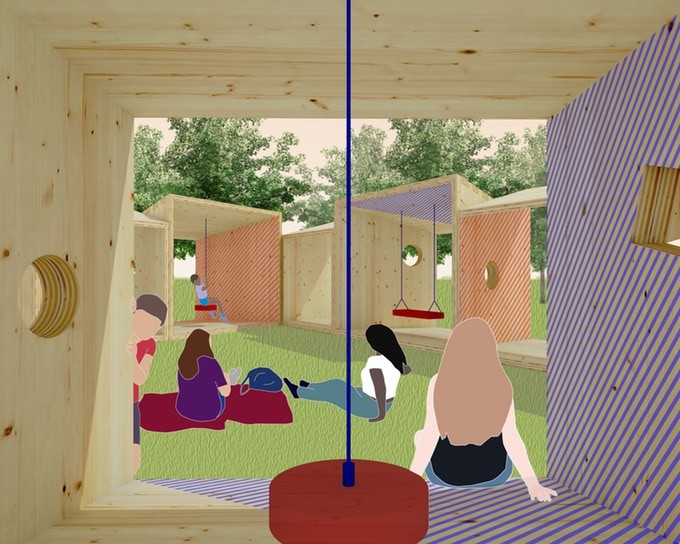 The City of Dreams Pavilion focuses on “the future of a world that faces strains on both economic and natural resources” through the promotion of waste material reuse, sustainability-orientated thinking, and an awareness of the environmental impact of architecture. The winning scheme manifests this ethos through the reuse of cross-laminated timber modules, held together with an oversized finger joint. While identical in size, the modules are individually identified by playful patterns of painted hatches and windows, with timber cut from the material to create windows repurposed as swing seats.

On Roosevelt Island, the modules are organized in a triangular form, creating covered seating areas and community swinging spaces, with complex visual fields enabling hide-and-seek games. The generous central space created by the twelve structures lends itself well to community events when combined, before the end of the season where modules will be separated and relocated to parks and schools across New York City.

The annual competition is hosted by FIGMENT, the AIANY Emerging New York Architects Committee (ENYA), and the Structural Engineers Association of New York (SEAoNY). Somewhere Studio will now work with the organizers to select a site for Salvage Swings and develop the design to facilitate construction.

To support the project, the organizers have created a Kickstarter campaign, allowing the public to make donations for the scheme’s fabrication, installation, and maintenance.

Cast & Place has been announced as the winner of the 2017 City of Dreams competition to create a pavilion for New York City's Governors Island.