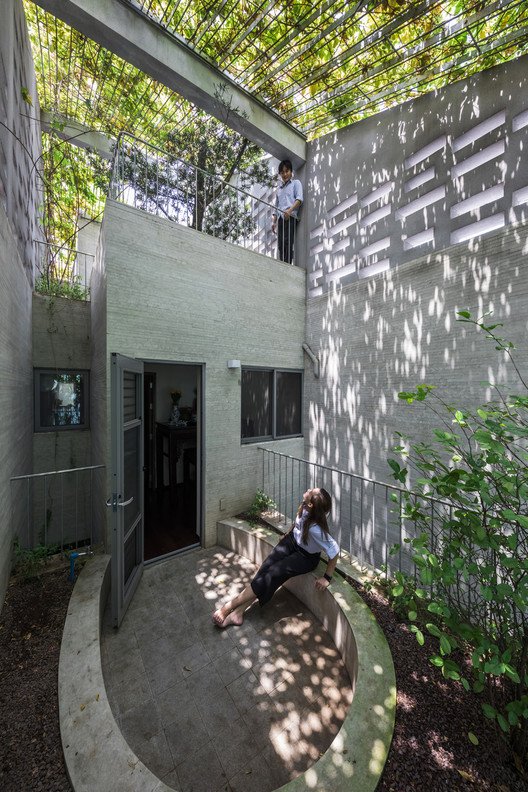 Text description provided by the architects. The Breathing house is for a single family, located in the heart of Ho Chi Minh City. The plot is 3.9m wide and 17.8m deep, only accessible by a tiny alley with crowded surroundings. Within this extremely high-dense neighborhood, we aimed to design a house that introduces an external environment while ensuring privacy.

Due to the circumstances of site, the opening of the building was physically constrained  to the front, top and back of the house. In order to adjust the distance between neighbouring buildings while maximizing the opening area, we wrapped the aforementioned three surfaces of the building with a “green veil”, which is made of creeper plants that grow on a steel mesh. This soft layer, as an environmental diffuser, filters direct sunlight and prevents the interior space from overexposure to the outside, without the feeling of isolation. It is composed of planter boxes at each floor slab, with modularized galvanized steel elements attached to it. This structure provides a green view throughout the house, which also protects the residents from the urban crime.

Inside the “green veil”, the building consists of 5 tower-like volumes that are staggered and connected to each other, arranged in between the two boundary walls. The external spaces created by the staggered arrangement of the volumes, which we call “Micro voids”, play a role in providing myriad indirect lighting and ventilation routes throughout the building. In the narrow and deep plot shuttered by neighbours on both sides, it is more environmentally effective to promote ventilation for each corner of the house, by multiple “micro voids”, rather than having a singular large courtyard. The “micro voids” have openings on each of the floors, through which the residents have a more longitudinal and diagonal see-through view from everywhere, looking into the green and other spaces. The staircase is also designed as one of the micro voids with top light and openings facing the rooms. The porous composition of the building reduces the use of air conditioning to enhance natural ventilation, creating both spatial and visual connection and depth in the house.

The roof terrace is covered by the “green veil”, becoming a space full of greenery which is rare in the crowded city area. The significance of the project is that it creates a green space, in the heart of a growing mega city. We hope the essence of this design would give positive influence to the cities in Vietnam, which is losing its green spaces at an alarming rate.