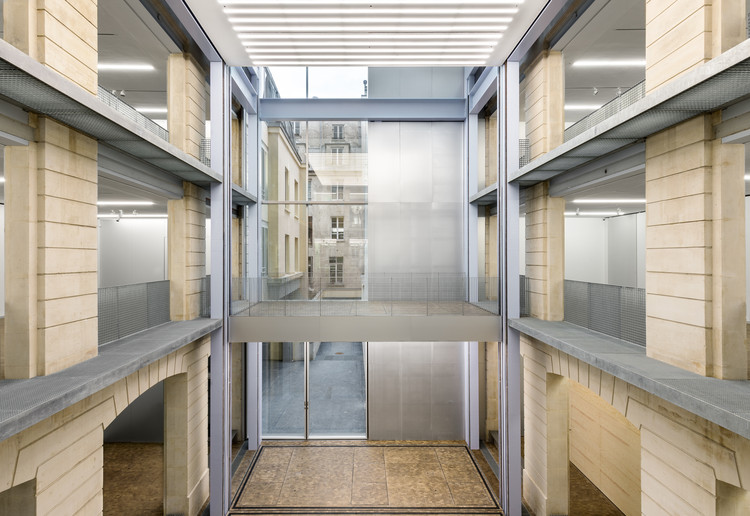 Text description provided by the architects. A late 19th-century industrial building is refurbished for Fondation d’Entreprise Galeries Lafayette to house exhibition and production spaces, with a focus on creation, innovation, and research. OMA has inserted an exhibition tower into the courtyard of the building in which two sets of mobile platforms will offer a large repertoire of spatial configurations; the programmatic flexibility provided increases the potential of the existing building. A production centre at the heart of the site underpins the Fondation, while the ground floor becomes a passage connecting rue du Plâtre to rue Sainte- Croix de la Bretonnerie and hosts the public programs.

The site is located in Le Marais, in the heart of Paris, surrounded by artists, craftsmen, ateliers and workshops. This area, in the immediate proximity of the Centre Pompidou, is one of the oldest neighborhoods of the city and its distinctive architecture is protected by a heritage preservation plan. The project is based around the renovation of one of Groupe Galeries Lafayette’s historical properties – a former industrial building, erected in 1891 by the founder of BHV department store. The five-story, U-shaped, courtyard building offers an elegant industrial façade on Rue du Plâtre, while at the rear a covered public passage provides access to the neighboring rue Sainte-Croix de la Bretonnerie.

OMA was commissioned in 2012 to transform the existing structure into a production and exhibition centre to host the Fondation d’Entreprise Galeries Lafayette while respecting and preserving the building’s heritage. The architectural concept was derived from the need for flexibility – a common requirement for cultural institutions – and from the restrictions applied to the site by the City Heritage authorities. During the design process, the area covered by the heritage preservation increased, limiting possible interventions. The consequence was an intensification of the architectural scheme.

The 19th-century building has been fully preserved, cleaned and restored to its initial state, and a new exhibition tower inserted to fill the footprint of the courtyard (ca.100m2). The tower will feature two mobile floors that can each split into two unequal parts, thus creating four independent platforms. Using onboard motorization, the platforms will move along a rack and pinion system, to align to the various existing floor levels. Accessible from the original openings onto the courtyard, the new exhibition spaces of the tower will extend and articulate the existing spaces; the mobile floors offer a new curatorial dimension, complementing the traditional use of the preserved structure.

Located in the basement is a production centre for the arts, a fundamental component of the institution, where invited artists conceive and build their projects. This, combined with the exhibition tower aims to trigger new ideas and new works; artists will develop projects according to a selected arrangement of the mobile platforms. The total area of the building is 2500 m2. 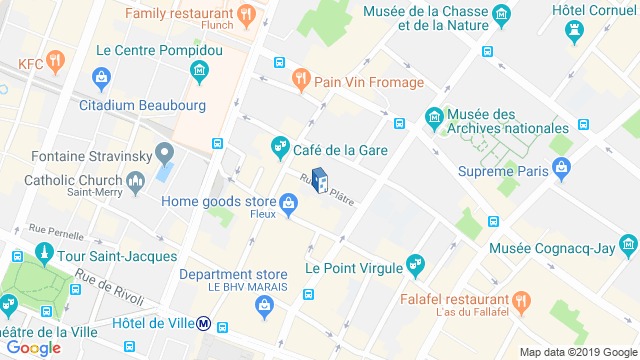 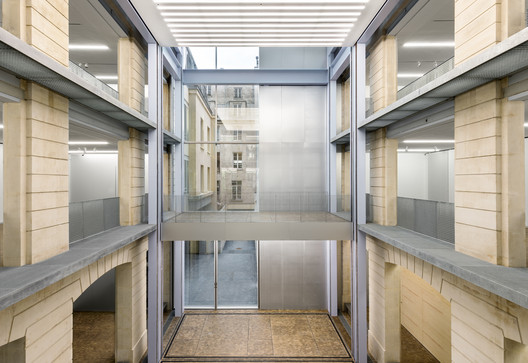