Ghilardi+Hellsten and Karres en Brands have won the competition to design Norway's new Stavanger cultural hub. Dubbed ‘Three Houses and a Long Table’, the project will transform the historical Nytorget site in Stavanger. The team worked with engineering partner Dipl.-Ing. Florian Kosche AS to combine a youth cultural center, offices, shops and an art gallery around a multi-functional green space. The proposal aims to build upon the qualities with a design that's anchored in the city fabric around public space. 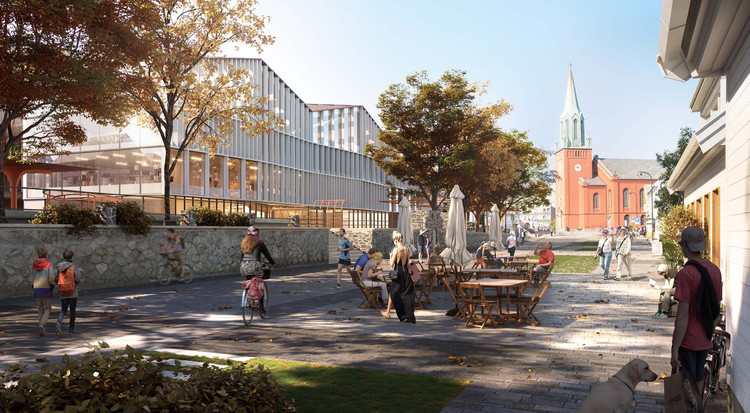 Located between the historical city centre and the city’s eastern district, Nytorget currenty houses a range of cultural and art initiatives for the youth of Stavanger, such as Metropolis (a cultural centre for the youth). As the jury noted, the proposal was chosen for its clear concept to develop a lively urban space. The main intervention will create new connections to the city and connect Nytorget with the old city center. The three houses and a long table concept was made to facilitate urban life around the square.

The Long table was designed to highlight activity on the square. Inspired by the community ritual revolving around the Longtable, the proposal puts forth a metaphorical stage for community life. The Longtable is a hackable piece of urban infrastructure articulated by a set of edges and satellites that organize and activate the space strategically, while leaving room for informality and spontaneity in between. It was made as a park in the square. This new space becomes the most important organizing element of the square, concentrating activity and providing a unique space that changes throughout the day and from season to season.

Three Houses was made as a mixed-use development that combines flexible space for various tenants (office, hotel, culture) interconnected by a multi-functional base that houses the local Youth Culture House (Metropolis). Each of the three houses respond to their context and articulate the streetscape on all sides while still facilitating pedestrian connectivity trough a intimate inner space with characteristic narrow passages. The first two floors are designed for programmatic mix, with public ground floors facilitating space for cafés, restaurants, gyms and shops. The office buildings were purposefully conceived to be varied and house diverse businesses. Common to all three buildings is their construction; built in wood, a local, sustainable material, with unique floor plans and open city views. 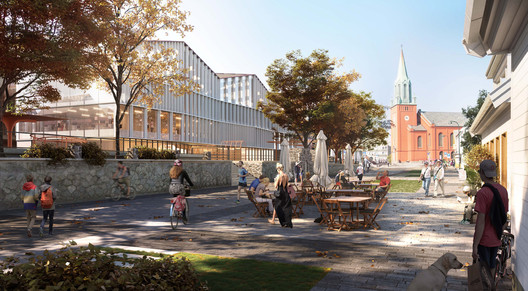