The Vancouver Art Gallery has unveiled the final design for its 300,000-square-foot building designed by Herzog & de Meuron. Designed to serve the Gallery’s ever-expanding collection of art and educational programs, the scheme will offer “a global platform for Vancouver’s and Canada’s thriving arts scene and play a vital role in establishing this city as one of the world’s most foremost cities for arts and culture.”

The scheme has been designed as a sculptural, symmetrical, upright building infusing opaque and transparent surfaces. The stacked scheme sees a minimal mass at the bottom contrast with larger volumes concentrated at the top, allowing light and air to filter down to an active, open-air courtyard below.

The museum is to be located at Larwill Park, at a node between the city’s Downtown, Yaletown, Gastown, east Vancouver, and Chinatown districts. The stacked volume design has been shaped with British Columbia’s climate in mind, with open-air spaces permitting summer sun, but shielding against winter rain. Inside, the scheme will contain galleries, classrooms and reading rooms, a theatre, restaurants, and shops.

The project for the new Vancouver Art Gallery has a civic dimension that can contribute to the life and identity of the city, in which many artists of international reputation live and work. The building now combines two materials, wood, and glass, both inseparable from the history and making of the city. We developed a façade out of glass logs which is pure, soft, light, establishing a unique relation to covered wooden terraces all around the building.
-Christine Binswanger, Partner in Charge, Herzog & de Meuron

News of the scheme comes shortly after the Swiss firm unveiled images of their hovering trapezoid structure for the University of Zurich. Other notable gallery schemes by the firm include the Tate Modern and Tate Modern Switch House in London, and the Tai Kwun Centre for Heritage and Art in Hong Kong.

Editor's Note: This article was originally published on 30 June, 2016. While the debate surrounding the terms of the UK's exit from the European Union continues to rage, the Tate remains a steady icon for London and the UK. But the building has also become a symbol in a new fight: one between the capital's elites and the general public. 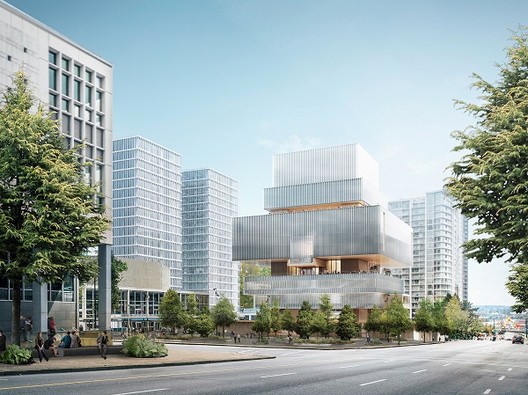