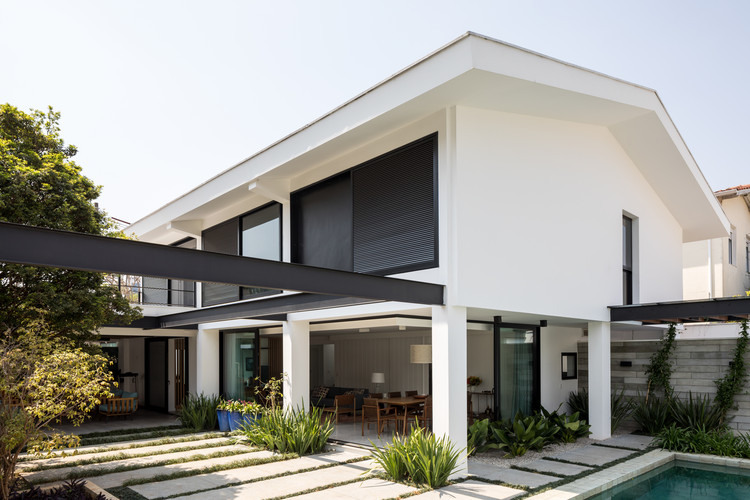 Text description provided by the architects. The original house dated from the 60’s, is located in Moema, São Paulo, a traditional and very green neighbourhood, close to the Ibirapuera Park. The new language established by the remodelling, appears initially in the external wall. Elements in concrete and black metal completely modified the appearance of the entrance. On the front facade of the house the choice made was the U-glass system which allows the entrance of light as well as it guarantees privacy. Punctual openings with conventional frames have brought the garden to the inner part of the house.

The volume of the front had its carved replaced by a slab, and for that reason the necessity of metallic reinforcements. The original volume of the house was maintained in the renovation, but internally there was a complete restructuring of the spaces: kitchen, laundry and TV room were transferred to new spaces. This decision permitted the new proportions to be more appropriate to the uses of the new residents.

The old garage gave way to the new veranda, with a living space and barbecue area, both integrated to the garden and pool. Similarly, the sliding frames of the living and dining rooms allowed a thourough integration with the leisure area.
The metal beams used to support the new slab were extended til the outer walls, creating covers for access and delimiting the spaces.

The choice of the colors for the walls and beams - white and black - guarantees contrast and sobriety to the volumetry. Granilite flooring, concrete benches, as well as the fixed elements made of light or white painted timbers also guarantee this effect. Little touches of color can also be seen in the veranda and in the kitchen, which are the spaces where the family enjoy getting together

The design of the ladder was specially elaborated from the client’s request, meaning lightness and transparency to the main circulation area of the house. Metal plates have been attached to the rods which raise up from the floor to the ceiling. Fixed on metal plates, the steps are made of an ebanized effect wood. On the upper deck, the bedrooms and bathrooms were completely restructured. The same principles of contrast among materials and colors were maintained.