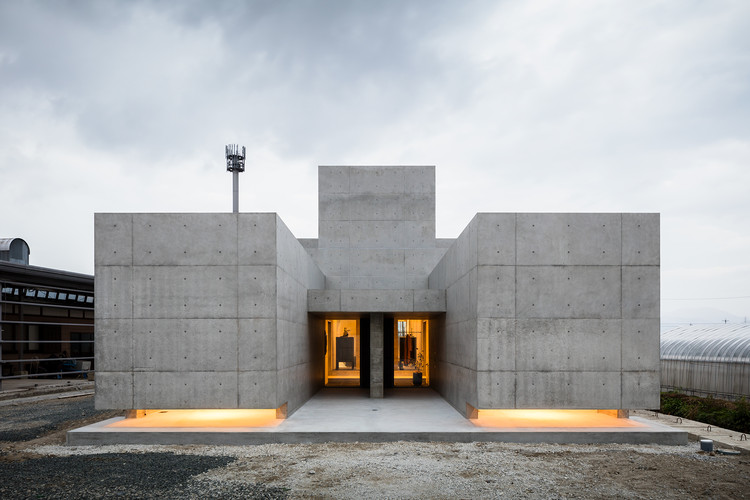 Text description provided by the architects. The site is located along a highway with a large volume of traffic. A field expands around the site that is adjacent to the concrete factory run by the client, and a traditional Japanese house where the parents reside. Because the environment gives a somewhat mixed-up impression, a house was sought that would produce visual expansion while blocking eyes from surroundings. Thus, I planned a house that aligns its axis with the north side where you can obtain the widest view while laying out the spaces that have their own extensity from the entrance through the backmost terrace. The recess of the symmetric façade composed of the volumes is made into the entrance. The thick and heavy wall positioned at the center adds more sense of depth. It also plays a role of “Eye Stop” that keeps eyes outside from easily coming through.

When entering the hall, the space created by the tall volumes welcomes guests with watery light from the top light. The space is divided by seamless glass sidewalls, which give a perspective effect to the visibility of the space beyond. The two rough-textured walls have been provided to give special direction and weighty impression, as well as to make the space in between as a passage to the living room. In the passage, a door has been positioned that can be flexibly opened/closed to develop diverse space experiences.

The living and dining spaces that are connected with each other are encompassed within a large volume embraced by the space. An attempt has been made to segment the space by differentiating ceiling height and floor level. At the same time, the light from a carefully-planned opening has produced changing shadow and texture and created a deep space.

At the end of the area continued from the entrance, I wanted to realize an open space that incorporates scenes or lights. Therefore, I laid out a room that can be used as an extension of a living room and provided a terrace that surrounds the room.

The tiles that are used for the room are also used for the terrace to produce expanding feel while enhancing continuity between inside and outside of the room. Through the glass wall at the north side, you can enjoy the view clipped out by the horizontal line of the wall, making the house impression far richer. The sequence of spaces, which are unrolled along the axis, generates comfortable tranquility that gives exquisite aesthetics to daily life. 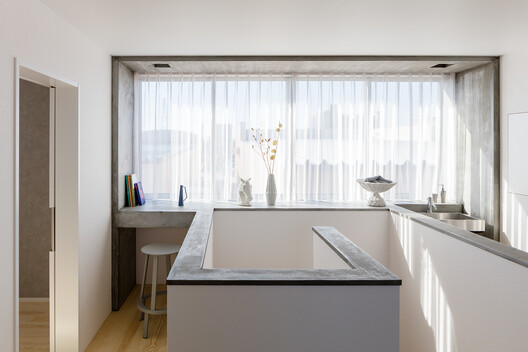 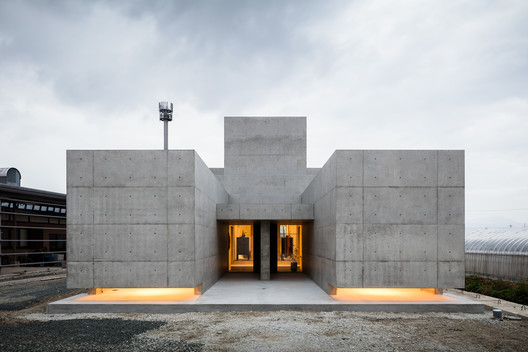