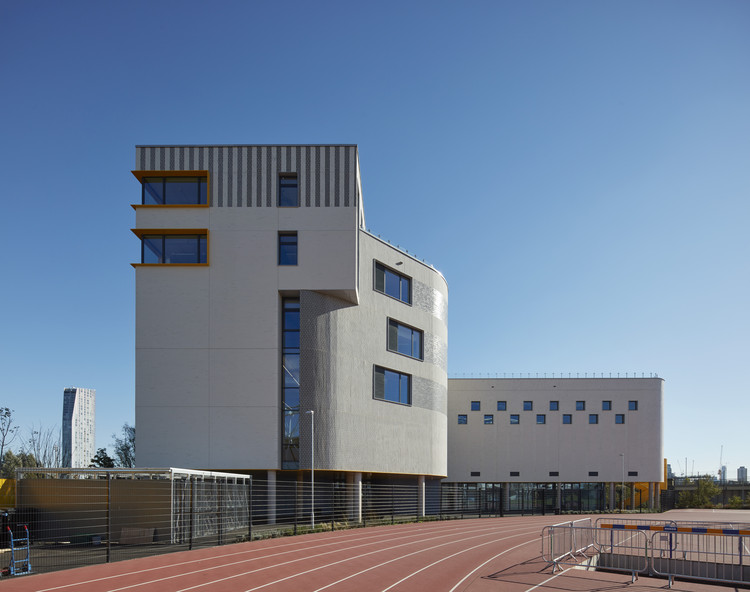 Text description provided by the architects. The Bobby Moore Academy Secondary School is a new 6FE secondary school for 1140 pupils on one of the smallest secondary school sites in London. Situated in the heart of the Olympic Park, it provides much-needed education and community facilities to support the growing local neighborhood. Penoyre & Prasad has created a new exemplar for the high-rise school, a design comprising 9,240m2 of diverse learning and social spaces across six stories, woven together through vertical and horizontal connections.

The building presents a strong architectural presence to hold its own against the dominant Olympic structures such as the Stadium, Orbit and Aquatics Centre. Its articulated form presents a bold civic presence to the Park, fronting a new public space overlooking the Mill City River. Architecturally, it has a kinship with its smaller sibling, the Bobby Moore Academy Primary School, opened last year and located west on the other side of the Olympic Park. The crisply detailed palette of two-tone brick slips in a woven pattern of glazed and matt finishes, the deep aluminum window reveals punctuated with bright yellow accents, and the carefully articulated massing creates a distinctive identity for the schools. The secondary school is carefully positioned along the site’s northern boundary to maximize south-facing external play space.

The main large spaces - assembly hall and sports hall – are raised to the first floor providing outdoor covered social space at ground level. A series of roof terraces step up the south elevation to provide additional external social space, commanding distant views over London and Canary Wharf. The building was designed in extensive consultation with the David Ross Education Trust and the London Legacy Development Corporation, with complex educational and community needs. It has been organized as a truly inclusive facility to be used in evenings, weekends and holidays by the wider public. Community-accessible facilities – dining, gathering, assembly hall, music, and IT teaching, and sports facilities are located at ground and first floor, with inclusive changing facilities at both levels, with the school’s teaching spaces on the upper levels. An extra-large lift accommodates parasports teams using the sports hall.

Packed into its compact form is a school of generous proportions, incorporating a web of large and small spaces, visually and physically connected through voids, screens, and walkways. A central triple height atrium rises up the center of the building forming the heart and focus of the school and providing orientation along the corridor’s length. Above this sits a double-height library, with a roof terrace above. A triple height sports hall and double height assembly hall and drama studio are inserted as distinctive volumes at first floor, while a double-height dance studio bookends the building at one end. Windows and screens maximize transparency and views through and into these spaces. A generous internal ‘street’ forms the backbone of the school with voids punctuated on each level to connect the floors and provide light from skylights above. Colored floors and signage provide identity and orientation.

Arranged either side of this wide central spine is teaching spaces organized by faculty. Throughout the school, large windows maximize views to London to the south and the Olympic Park to the north while providing plenty of daylight and a sense of openness to the teaching spaces. The majority of teaching spaces are naturally ventilated, utilizing low energy heat recovery units fixed to the windows. The flat-slab in situ frames provides thermal mass while allowing long-term adaptability, and LED lights and low-flush toilets reduce energy and water use.  The heating system is linked to the Olympic Park-wide district heating network.  The school is on course to receive BREEAM excellent certification.

Rafael Marks, Associate Partner at Penoyre & Prasad, said:
“The new school is a beacon of learning in the rapidly developing Olympic Park. It provides first-class educational spaces while capitalizing on the world-class sports facilities around it. The big challenge for the design was accommodating the large programme of spaces on such a tiny triangular site of less than 3,900m2 while maximizing external play space for the students. Set in the pantheon of great Olympic architecture, it also had to punch above its architectural weight.

Given the site’s exposure on all sides, the building is conceived as an object, seen in the round and from afar.  Its distinctive form and architectural expression serve to create a strong identity for the school while rooting it in context and creating a civic realm where none existed before. The building is like a tardis. From a distance, and in comparison to the Olympic Stadium and the vastness of the Park, it appears small and diminutive. On closer inspection, it has a more dominant and civic presence, commanding its site and the adjacent canal.

Once inside, the building reveals itself as a series of complex and interrelated spaces. The use of double and triple height volumes, voids cut into the circulation spine, and extensive use of glazing creates ever-changing experiences and continuous vertical and horizontal connections. Wherever you are in the school, one is oriented to the outside with extensive views across to London and the Olympic Park. The building is rooted in the Olympic Park while providing the students with wider horizons to the city beyond.” 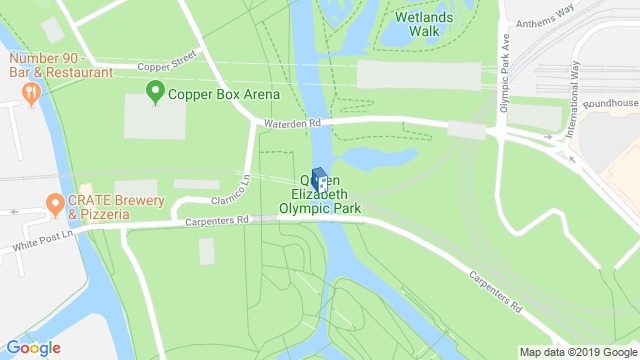