The viability of the Trump administration's border wall has come under fire as all eight prototype structures have failed at least one breach test. The eight border wall prototypes in Otay Mesa, California were assembled in early 2017 after an executive order directed the Department of Homeland Security to build the border wall. The news comes as the administration prepares to potentially declare a national emergency to jumpstart construction of the wall along the U.S.’s southern border.

Each design was subjected to breach tests orchestrated by the US Customs and Border Protection. Tests involved implements that could be easily accessed, like sledgehammers, pickaxes and power tools. Customs and Border Protection (CBP) agents were instructed to try to breach the eight border wall segments—and eventually broke through all eight. Teams were able to cause holes “larger than 12-inches in diameter or square,” the DHS standard definition of breaching. In a specific example, a photo obtained by NBC News shows one of the steel bollard border wall prototypes was easily breached using an off-the-shelf saw. In addition, none of the eight designs meet the requirements for adaptability across the thousands of miles of the border’s rugged, varied terrain.

The US senate has refused to foot the $5.7 billion bill for the border wall project, triggering a partial shutdown of the government that has become the longest in the country's history.  When asked about the photo obtained by NBC yesterday, President Trump responded that, “that’s a wall designed by previous administrations.” While previous administrations have used steel bollards at the border, the prototypes tested were built by the Trump administration. 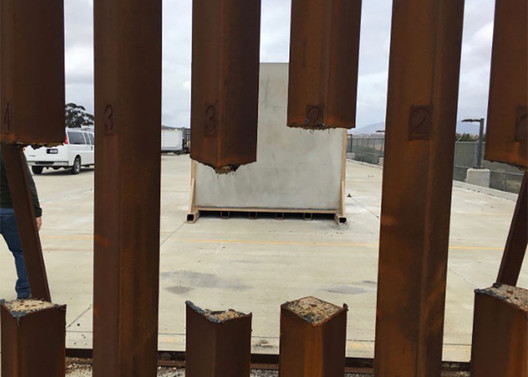