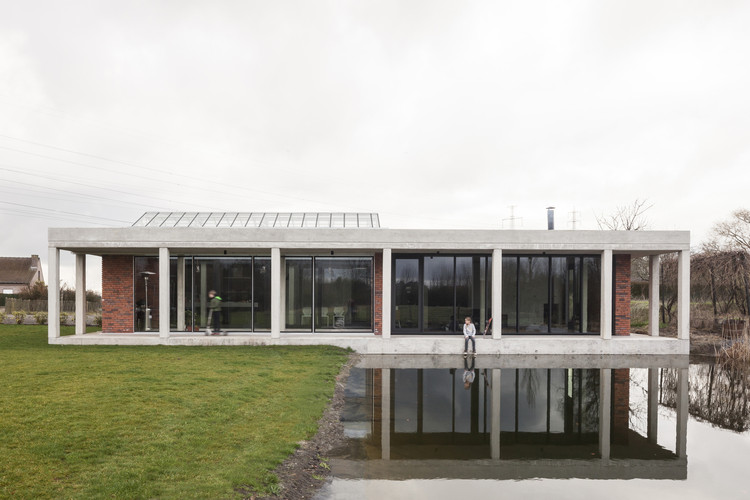 House Machelen: a dwelling that fits between a floor and a ceiling, separated by a grid of columns.
This house is built on a plot located in an outlying area, behind a first row of typical Flemish landhouses (“fermettes”). An exceptional starting position: there are no direct neighbours – splendid isolation – and the building is barely subject to urban regulations.

So how to design a house that can extract the maximum from its surroundings?

‘Plan libre’
This question leads to the scenic, basic vision of a ‘plan libre’: a dwelling that fits between a floor and a ceiling, separated by a grid of concrete columns.

All extra architectonic elements (walls, windows, …) are ‘free’, not bearing. The concept allows itself to create a very open plan with flowing spaces, hence fascinating views through the house and its surroundings.

This home is a mini (interior) landscape in itself: a little coral reef, a rough concrete structure to inhabit whether by human or (later on) by nature.

Interaction with the green surroundings
The design of the facades is a direct result of the functions that lie behind it; they frame the surrounding landscape as pleases the residents. Therefore, there is no real front or back facade – all four are differently, influenced by nearby natural elements.

Structure = finishing
We convinced the client to keep the used materials visible – to honestly show the structure, instead of plastering walls and ceilings and cover everything up.

The structure is fully made out of site-poured concrete. Rough plywood panels are used for the formwork. It was definitely not the intention to get the concrete smooth and clean; small defaults, seams in between the different panels and the markings on the wood are an added value.

In addition to the concrete, an almost typical Flemish orange brick was used for the facades. Both inside and outside. The walls are reduced to their essence.

All the built-in furniture, including the kitchen and wardrobes, are made out of dark concreteplex plates. This material does not require any additional finishing. It’s actually a cheap casing plate – again a search for the essence of materials.