The construction adopts the steel and wood hybrid system mainly composed of laminated wood to achieve super-fast construction with controlled quality. We make the best of the self-coordination ability of contemporary construction enterprises in construction organization, structural optimization and detail processing. Through high integration and reasonable division of design and construction, we achieved the maximum space quality and comprehensive effect during the short period.

The project of riverside connection is aimed at returning the river to the people, reflecting Shanghai’s open attitude and human care. The walking path, running path and riding path are interconnected. Such path system can connect the open space of the riverside and form a space guide along the river as well as a space guide perpendicular to the river through a series of spatial veins extending into the city. The linear “moving” space increases the possibility of event occurrence and public interaction, while the 22 point-like River Viewing Service Stations complement the rest space of “staying”. As an indispensable urban infrastructure in the connection project, the River Viewing Service Station has got rid of the traditional image of infrastructure: secluded, cold and serious. Through the multi-dimensional integration with the landscape and the terrain, it has formed a daily, autonomous and dynamic public space, which will increase the space experience of Huangpu River bund.

This series of tiny stations in the most public riverside space in the heart of Shanghai gives us the opportunity to explore the relationship between architecture and landscape, as well as the relationship among microscopic sites and macro public spaces & urban landmarks. We hope that this station can intensify the sites' features while serving the citizens in an easily approachable atmosphere so that the architecture can become a scenery amplifier. The name of “River Viewing Service Station” has highlighted the double appeals of the service station.

Each station consists of two parts: a relatively closed public toilet and an open and transparent public lounge with information guides and publishing, bookshelves and other service facilities. As for the distribution principle, we take the openness of the lounge and the maximization of the river sight line in the station as the first priority. Secondly, the sight line of small Lujiazui central area is considered on a macro scale. Between these two parts, there is a covered corridor goes across the building, connecting the riding path on the back of the river and the running and walking path on the side of the river. There are vending machines, lockers, hot and cold drinking water, shared umbrellas and other convenience facilities in the corridor. On the riverside, including the side of the lounge, there is a deep and wide platform space under the armpit. A long bench is equipped near the wall, which invisibly enlarges the public open space.

The square planar contour of the station is in sharp contrast to the relatively complicated half-spiral straight line curved surface single-direction purline roofing structure made of copper imitated Al-Mg-Mn Alloy Sheeting. Viewed from the riverside, the station resembles a large pavilion with far-extending eaves and a lithe crimped roof, which is slightly elevated from the site. The umbrella-shaped radial purlines under the counter-slope eaves in the north have become a visual focus.

The purlines converge to form a natural triangular skylight, one half in the lounge and the other half above the vestibule, illuminating the dark roof recesses and strengthening the space depths. Viewed from the back of the river, the station roof is divided into two halves respectively in the east and west, which have different heights but both tilt inward. Especially, the roof at the corner of the western-section staircase in the center has been depressed almost to the lowest point of the visual horizon. This especially depressed dimension has strengthened the entering sense of the side back to the river, guiding visitors from the central vestibule to the river scene.

We hope that the River Viewing Service Stations will form physical guidance for the public and encourage the free use of space. People can walk through the low and intimate corridor to the river bank with the guidance of the triangular skylight. The roof will gradually rise with your body movement, the river view at the end of the vestibule will also raise in your field of vision, breaking through the high and spacious eaves in the north. Standing on the open and clear river-viewing platform and viewing through the trunks at the bottom, you can see the glistening river surface is stretching horizontally, constituting a flowing scene with figures walking or running along the riverside.

The benches on both sides of the vestibule will attract people to sit idly and appreciate the river scene leisurely. At this moment, you can only see the glistening river surface and feel special tranquility when the city on the other side of the river is concealed by the trees. Of course, when you descend from the veranda, you will access the running path and waterborne platform, where you can enjoy a panoramic view of the magnificent city skylines across both sides of the Huangpu River. 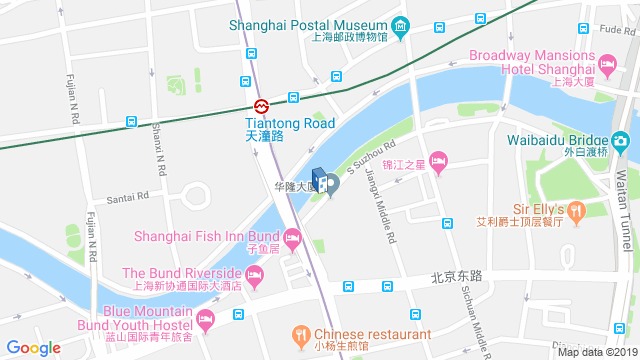 Location to be used only as a reference. It could indicate city/country but not exact address.
Share
Or
Copy
About this office
Atelier Z+
Office
••• 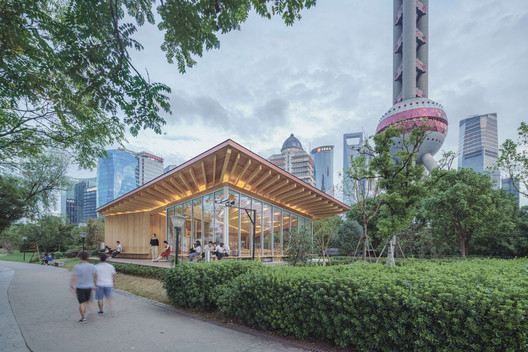