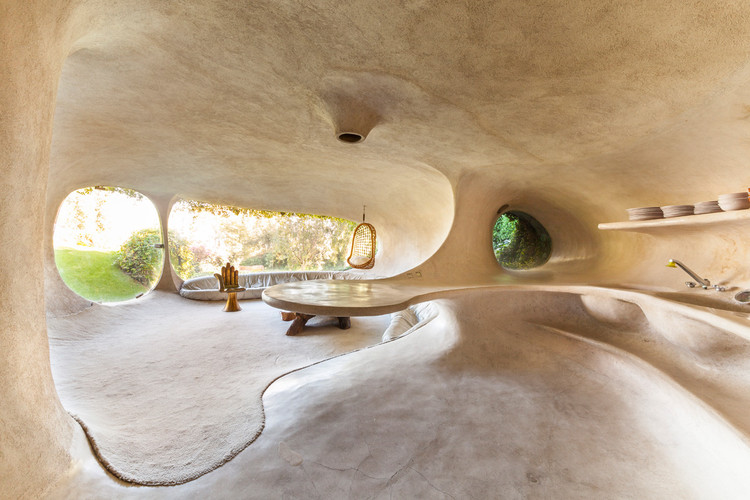 Text description provided by the architects. The original idea of the project took its simile from a peanut shell: two wide oval spaces with lots of light, united by a space in low and narrow gloom. This proposal arose based on the requirements of the elementary functions of man: a space to live together, with room, dining room and kitchen and another to sleep, with dressing room and bathroom. The original concept is defined in two large spaces: one day and one night, looking for the feeling that inside the person will enter the land, that was aware of the uniqueness of this space without losing integration with the exterior green areas.

In the construction process, it was necessary to achieve the same continuity as the design. For this, a moldable material was used that would allow a game similar to that of the plasticine in the models. Coupled with this requirement of plasticity, it was evident that when dealing with a house, the material had to fulfill requirements that took it beyond the sculptural mass. The investigation began and soon there was no doubt: the ferrocement was the right answer. The assembly of the ferrocement began on the template that looked like a skateboard track, forming the shell with a metallic skeleton, in which the rods were arranged in the form of rings, changing the height according to the space. Next, the rods were spirally wound. At the end of the frame, two ropes of coop braided together were fixed, and then the concrete was thrown. The cover was then coated with a 3/4 inch layer of sprayed polyurethane, which serves as an insulator and waterproofing.

The earth and the grass protect the membrane from the sun, the wind, the hail and the wet-dry cycle; avoiding dilatations and contractions that cause fissures and consequently humidity. The green dune is the envelope of the interior volume that is almost invisible. From the outside we only see grass, shrubs, trees and flowers. Walking on the garden is walking on the roof of the house without realizing it.

Contrary to what one might think, this semi-buried house was brighter and more sunny than a conventional house. In this type of housing the windows can be directed towards any orientation and the domes allow the entrance of light and sun from above. The ventilation is facilitated thanks to the aerodynamic forms of the dwelling that allow the free circulation of air. 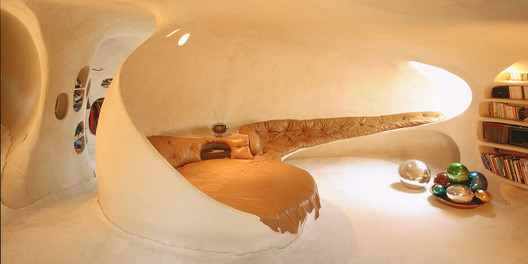 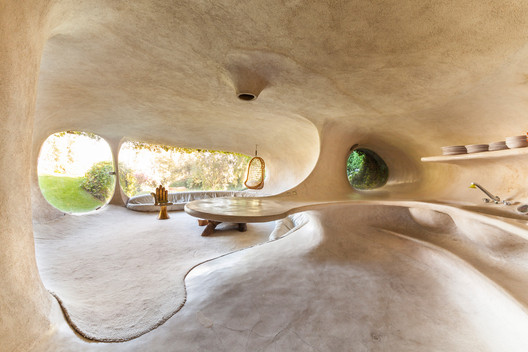