A bus inspired by the Bauhaus school in Dessau will take to the streets during the school's centenary year to visit four cities around the world. The bus is part of the larger SPINNING TRIANGLES project by SAVVY Contemporary that is curated by Elsa Westreicher. Marking the 100th anniversary of the Bauhaus, the project aims to investigate, challenge and act against the neocolonial power structures inherent in design practices, theory and teaching. 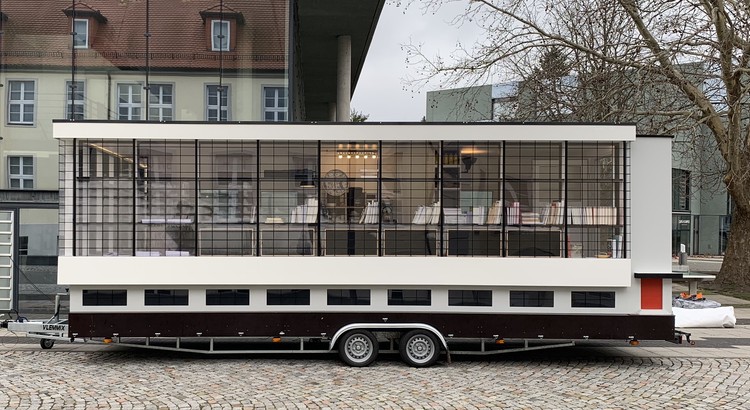 Designed by Berlin-based architect Van Bo Le-Mentzel, the 15-square-metre mobile building is created in the image of the iconic workshop wing of the Bauhaus school building in Dessau – a building conceived by founding director Walter Gropius and built in 1919, to embody the school's core principles and values. It features the same gridded glass walls that wrap around the building, as well as the famous lettering down one side. Inside is an apartment-like space, containing an area to host exhibitions and workshops, plus a reading room filled with books charting the Bauhaus' history and legacy.

Conceptually, the project will look at 'the big global questions' of power structures, injustice and violence by working directly and locally in a range of places. The project aims at working, through design questions, as concretely within social and political realities that are inform and shaped by history and the current political status quo. Ultimately, the aim is to reverse and reshape the notion and manifestation of the Bauhaus school and to create a new school of design which might very well turn into an 'unschool'. This process will be developed between Dessau, Kinshasa, Berlin and Hong Kong.

The opening of the project takes place in Dessau. The project will invite guests to negotiate space and property and question the complex heritage of modernity. Interventions by various protagonists will activate this mobile “world heritage site” and thus open it up to the public as an “academy of the fireside”. The project will face the relations of coloniality and raise questions around heritage, property, urbanity, conviviality, visibilities and invisibilities. It will then travel to the opening festival of “100 years of bauhaus” in Berlin. Subsequently, the thought and design process will accelerate through a symposium and workshops in Kinshasa, resulting in the development of a new school concept. Five “masters” will then export this concept to Berlin and actualize it at SAVVY Contemporary, before its second iteration takes place at Para Site in Hong Kong.

SPINNING TRIANGLES is a collaboration with Tinyhouse University, Hochschule Anhalt, Goethe-Institut Kinshasa and Para Site Hong Kong. The project is directed and curated by Elsa Westreicher and Bonaventure Soh Bejeng Ndikung, and is funded by the Bauhaus heute Fund of the German Federal Cultural Foundation. 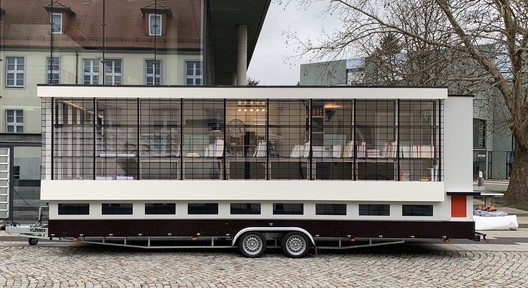