Save
An Expert Guide through MoMA's "Toward a Concrete Utopia: Architecture in Yugoslavia, 1948–1980"
Share
Or
Copy

Since July 2018, the Museum of Modern Art (MoMA) has hosted an exhibition exploring the architecture of the former Yugoslavia. “Concrete Utopia: Architecture in Yugoslavia, 1948-1980” became the first major US exhibition to study the subject, through over 400 drawings, models, photographs, and films.

With the exhibition soon coming to an end, Martino Stierli (Chief Curator of Architecture and Design at MoMA) and Vladimir Kulic (Guest Curator and Architecture Historian) have presented a 7-minute-long video guiding viewers through the highlights of the exhibition.

Available above, the video touches on a variety of structures, from the small, modular K67 Kiosk to the imposing Avala TV Tower in Belgrade. Tracing the genesis of the architectural movement; a post-war, utopian vision of a new society to which architecture played a central role.

The architecture that emerged during this period—from International Style skyscrapers to Brutalist “social condensers”—is a manifestation of the radical pluralism, hybridity, and idealism that characterized the Yugoslav state itself. Exploring themes of large-scale urbanization, technological experimentation and its application in everyday life, consumerism, monuments and memorialization, and the global reach of Yugoslav architecture, Toward a Concrete Utopia features work by important architects, including Bogdan Bogdanović, Juraj Neidhardt, Svetlana Kana Radević, Edvard Ravnikar, Vjenceslav Richter, and Milica Šterić.

The exhibition will be open until January 13th 2019. For more information, check out our previous coverage of the event, and visit the official website here. 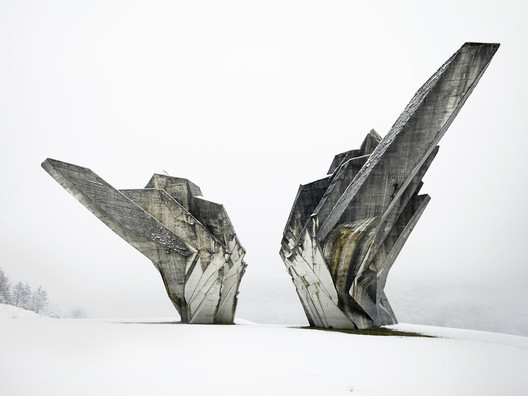