Design firm Sasaki has unveiled a design to transform Shanghai's Hongkou soccer stadium into a sustainable health and wellness hub. Rethinking China's first professional soccer stadium, the project aims to bring new life into the 1990s single-purpose structure. The design was formed by addressing the lack of connection between the stadium and Luxun Park. As a result, the park’s landscape is extended through the stadium and rises to meet the landscape as it flows through the building. 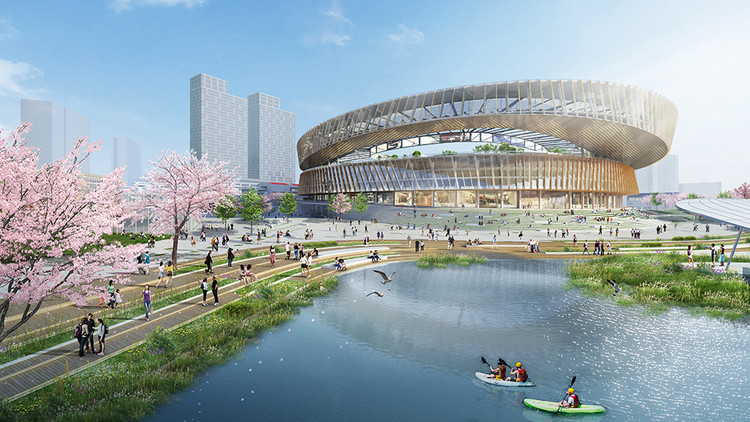 Located along Hongkou District’s major north-south green corridor, the stadium is accessible via public transit, including an elevated light rail and underground subway. Currently, however, the stadium remains isolated. It sits empty on non-game days, and offers limited connections to the vibrant cultural and commercial context which surrounds it. Underutilized space around the stadium and underneath the adjacent elevated light rail line presents an opportunity to stitch back into the urban fabric of the district.

Thinking beyond the stadium itself, one of the most significant design interventions is the creation of the Midline– an elevated park built upon the infrastructure of the light rail corridor. Connecting Hongkou’s university district to the north with the cultural and commercial districts to the south, the Midline is an iconic recreational spine for the city. The 2.2 kilometer first phase of the Midline provides uninterrupted pedestrian and bicycle access and links surrounding neighborhoods with a variety of community recreational uses within the stadium. At street level, new shops and restaurants embrace the entrance to the subway and activate the stadium’s main plaza and podium.

In addition to the new commercial and community recreational program, the stadium’s capacity was also expanded by 15,000 seats, accommodating a total of 50,000 spectators in an optimized seating arrangement. The integrity of the existing structural components of the stadium were also thoughtfully respected. A significant portion of the existing structure remains– including its core column grid– with new supports seamlessly integrated. The renovated stadium has 9 levels, each providing traditional functions like concessions and restrooms, while incorporating a diversity of new experiences including a soccer museum, VIP clubs, community recreation facilities, and a cantilevered restaurant that offers 360 degree views of the field, the adjacent park, and the Shanghai skyline. Rooftop gardens and outdoor concourses are open to the public, extending access from the adjacent park.

By positioning the stadium as a community asset, its renovation reaches far beyond its original function. Many stadiums serve the single purpose of hosting sporting events, resulting in an empty building during non-game days and in the off-season. Hongkou Stadium reimagines the arena as a multi-functional complex that fulfills the demands of large events while also serving as a unique public space for all citizens. With the main concourse integrated as an extension of Luxun Park, the stadium supplements the landscape with vistas across the park to the city beyond. Symbolizing competitiveness and sportsmanship, the two opposing rings of the new structure redistribute existing functions and create new ones.

Although the renovated building is beautiful and more democratically programmed, it is also designed for sustainability. The opening created by the shifted rings offers views into the park while improving thermal comfort through passive ventilation. Propelled by negative air pressure when hot air generated by the audience rises, the openings siphon cooler air from the park into the stadium. Rainwater runoff is collected and stored in underground cisterns used to irrigate the field and replenish lakes in the park. The facade is built from glass that digitally adjust its opacity to minimize passive solar gain and reduce energy consumption. During events, this façade also functions as a digital screen to broadcast events, allowing fans who cannot afford a ticket to the game to watch from the park and plaza, while the plaza is equipped with pavers that harness the movement of pedestrians to generate electricity. To enhance circulation and maximize efficiency during these large events, the redesign of the stadium offers seamless connectivity with the subway and light rail, encouraging fans to use public transit. The stadium’s main concourse serves as an extension of the park, inviting visitors to explore the adjacent landscape while decentralizing peak foot traffic before and after games. Together, the stadium’s new landscapes increases Luxun Park’s size by 36%, adding more active recreational uses and re-positioning Hongkou Stadium as icon for Shanghai’s growing passion for sports, health, and wellness.