Save
Building Drawings/Drawing Buildings: The Works of Sergei Tchoban
Share
Or
Copy

“A drawing should be a key to the understanding of architecture – what is there to like or dislike, where do architects’ ideas come from, how do these ideas make it to paper, and what is important in this process.” - Sergei Tchoban

For the past month the Russian-German architect, artist, and collector Sergei Tchoban has been the focus of the exhibition, Sergei Tchoban: Drawing Buildings/Building Drawings, bringing together fifty of the architect’s large-scale urban fantasy drawings. These drawings, while intriguing for their technical and artistic value, also reflect Tchoban's deeply personal contemplations about the past, present, and future of his favorite cities - Saint Petersburg, Rome, Amsterdam, Venice, Berlin, New York – along with in-depth documentation of five realized projects (two museums, two exhibition pavilions, and a theater stage design.) 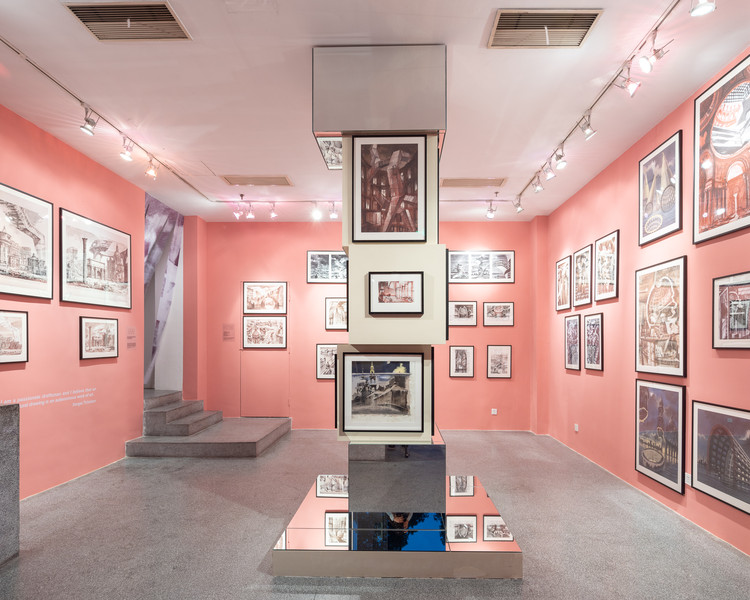 ”Many of us will name Paris, Venice, Rome, or Saint Petersburg, my hometown, as our favorite cities…" explains Tchoban. "I also like London and Milan where contemporaneity plays an important and contrasting role in its dialogue with historical fabric. There are numerous theories about Modernist and contemporary architecture, but we rarely reflect on what role this architecture may play in the totality of a historical city.”

The show traces the design process and highlights the architect’s intentions behind his searching architecture. Tchoban is questioning his own impact on some of these cities. His passion for architecture is guided primarily by urban mise-en-scène settings that he enjoys and captures on paper in his frequent travels. “I have a very straightforward attitude toward architecture," Tchoban explains. "I always ask one simple question – would I want to draw one of my own projects or my colleagues’ projects?”

This particular view of architecture has imbued his work at every scale, from towers that dot the Moscow landscape to even stage sets.  But while it is common for architects to work across scales, the move is typically one that goes from large to small. Tchoban's view of architecture as a set piece, rather than an object in itself bucks this trend, and puts people genuinely at the heart of the work.

“We are free not to look at paintings, but we cannot avoid looking at architecture; architecture should be beautiful," says Tchoban. "I associate beauty with such notions as tension, complexity, and contradiction. Moreover, it is the harmony of contrasts and contradictions, and not only similarities that could be considered as beauty.”

The exhibition, on show at the Gallery of Shanghai Study Center (HKU) from 02 November - 16 December 2018, was curated by Vladimir Belogolvsky, founder of the City of Ideas series. You can find more information about the exhibition here.

SERGEI TCHOBAN (b.1962, Saint Petersburg, Russia) graduated from the Repin Institute for Painting, Sculpture, and Architecture at the Russian Academy of Arts in Saint Petersburg in 1986. He is managing partner of the Berlin office of TCHOBAN VOSS Architekten and of the architectural office SPEECH in Moscow. In 2008, together with Sergey Kuznetsov, Tchoban started the namesake architectural magazine. The Tchoban Foundation was initiated in 2009 to celebrate the art of drawing through exhibitions and publications. The Foundation’s Museum for Architectural Drawings was built in Berlin in 2013. Among the architect’s other built works are the Federation Tower in Moscow, DomAquarée in Berlin, and Russia’s Milan Expo 2015 Pavilion. Tchoban served as curator of the Russian Pavilion at the Venice Architecture Biennales in 2010 and 2012 (Special Mention), and was named Russia’s Architect of the Year in 2012. He won the 2018 European Prize for Architecture by the European Centre and The Chicago Athenaeum.