Save
Stefano Boeri: "Cities have the potential to become protagonists of a radical change"
Share
Or
Copy

Stefano Boeri has used his guest speech at the New York Times Cities of Tomorrow forum to focus on the role that green and urban forests can have in improving the quality of life and air in cities around the world. Speaking at the event in New Orleans, the acclaimed architect highlighted the impact of carbon emissions produced by buildings, while also stressing the potential for architects to use the built environment as a vehicle for positive social and environmental change.

Drawing from experiences such as the Tirana 2030 masterplan and the Bosco Verticale in Milan, Boeri suggested that “cities have the resources and the potential to become protagonists of a radical change aimed at countering the dramatic effects [of carbon emissions] becoming greener, healthier, and more integrated.”

A tree in the city, a tree of mature age, alone produces 110 kilos of oxygen each year; and it absorbs hundreds of grams of that invisible poison produced above all by the traffic that enters our lungs every day. But above all, a tree in the city absorbs about 400 kilos of carbon dioxide each year. Multiply the number of trees and other plants in the cities of the world, bring living nature not only in the courtyards and along the avenues but even on the facades and roofs of houses, schools, museums, shopping centers, are no longer just gestures of healthy ecology, good intentions of small minorities sensitive to the environment. These are necessary choices if we want our cities to become the protagonists of a challenge that every day becomes more difficult, but that is still open: to try, if not to stop, at least to slow the global warming.
-Stefano Boeri

The underlying message from Boeri speech was the need to challenge rising CO2 levels at their source: cities. He cited the Tirana 2030 masterplan, where the architect is set to transform the Albanian capital using a system of green corridors. To prevent urban sprawl, an orbital forest of two million new trees will encircle Tirana, dictating that new development takes place along historic central paths. The plan will see a tripling of green space in the city center, through two green rings suitable for walking and cycling, and a large natural oasis around Lake Farka.

While the Tirana 2030 scheme focuses on the impact of urban intervention on a city-wide scale, Boeri also used the forum to stress the potential of vertical forests, “bringing living nature on the facades of our buildings.” Coupling as an anti-sprawl device and urban forestry device, the firm’s Milan Bosco Verticale incorporates the equivalent of two hectares of forest in a concentrated 1500 square meter surface.

Boeri has plans to export the lessons from the Milan scheme to cities across the world, such as a timber vertical forest in Paris, and a prefabricated scheme in Eindhoven.

In China, considering that Shanghai and Bejing are among the most polluted cities in the world, there is a great attention growing around the theme of bringing nature inside urban contexts and even more on how to build new sustainable, green cities. The idea of Forest City we are developing in Liuzhou, Lishui and Chinese regions lays on the aim of creating medium – size establishments which integrate trees and plants on both horizontal and vertical urban surfaces.
-Stefano Boeri

Promoted by the New York Times, the Cities of Tomorrow Forum brings together politicians, mayors, entrepreneurs, managers, scholars and journalists to anticipate and compare the great challenges that the cities of the world will have to face in the coming years; starting from the effects of climate change, from innovation in urban transportation and from the dramatic themes of poverty and urban solitude.

Completed in 2014 in Milan, Italy. Images by Laura Cionci, Stefano Boeri Architetti. The first example of a 'Vertical Forest' (il Bosco Verticale) was inaugurated in October 2014 in Milan in the Porta Nuova Isola area, as part of a... 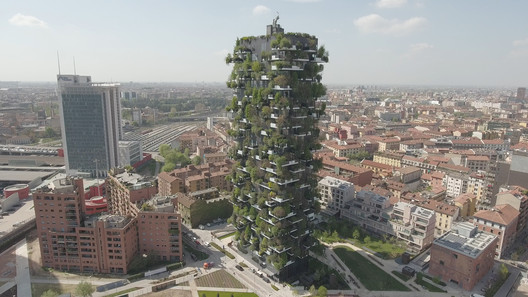