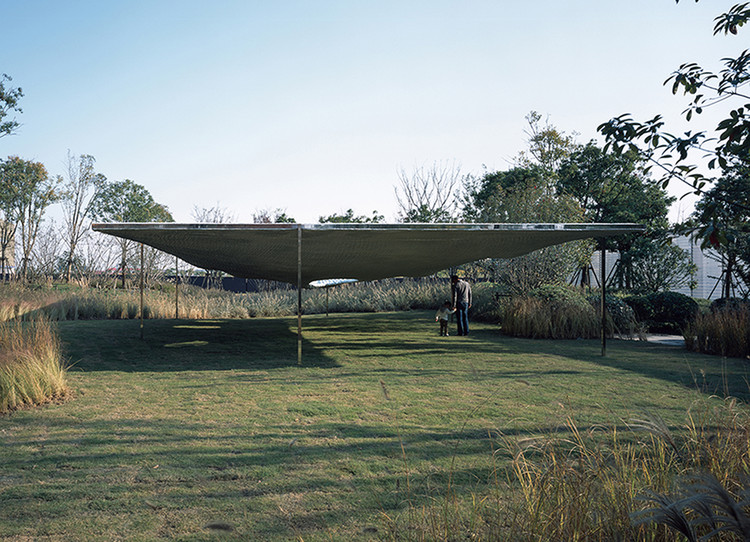 Text description provided by the architects. The pavilion is built for 2017 Shanghai Urban Space Art Season as part of an outdoor extension of the Lin Gang exhibition.

Nowadays, natural geological constraints of the sites are often changed and manipulated by modern technology, and Lin Gang New City in an exemplary place. Standing on the largest hydraulic fill reclamation in history, one would find it difficult to comprehend whether it is liquid or solid, natural or artificial. Inspired by the super-scaled act of land filling, we became fascinated by the ambiguity between material states as well as the unpredictability and mysteriousness of this unprecedented event. This kind of “accidental nature” became the starting point of the pavilion’s design.

We took the basic architectural prototype – canopy and column. The canopy is created by polyurethane foam: a heat insulating material that is usually hidden within architecture. Upon spraying, the foam rapidly hardens and expands, which gives it a bubble-like texture. The ambiguity of the foam’s material state gives users multiple ways of scalar interpretations.

We first attempted to define the curving form of the canopy through parametric physic form finding and optimization, however the outcome was overly monotonous. Therefore we turned to other options to resolve the structural deformation. Through a series of specific experiments on the materials’ performance, the architects and the structural engineer decided to pick nylon net to reinforce the polyurethane foam body. Consequentially, a new type of construction method is created: pre-stressing the nylon net by anchoring weight to different area of the surface and then spraying polyurethane onto both sides of the net.

The building method of the canopy contributed to two major benefits. Firstly, as the shell structure has already been “pre-distorted” by self-weight, therefore in theory, gravity will not cause another deformation as long as the boundary conditions remain the same; moreover, the process of pre-stressing was able to lower the risk of the polyurethane foam cracking. As a result, a lightweight pre-stressed shell structure became the canopy.

The following is the building process: before spraying the foam, we placed a numbers of inflated balls onto the nylon net and loaded each of them with different weight of sandbags. Through this process of elastic deformation, the pre-stressed property and the form of the canopy are generated. During the process of designing where to attach the sandbag weights, not only that we considered the structural integrity of the canopy, but also the users’ experience underneath the structure by articulating the sizes, quantities and positions of the inflated balls.

Meanwhile, we made structural analytical and optimization studies on the pavilion. Within an acceptable deflection range, the canopy is supported by 6 steel columns positioned on the edges of the structure with a maximum corner cantilever of 5m. Based on the theory of large deformation, we decided to use 50x50mm solid steel columns to support 80x6mm square hollow section beams that are directly connected to canopy structure.

In order to ensure the steel frame’s tolerance against lateral forces, we introduced steel rebars for the nylon net to attach to. As a result, forces transferred from the rebars to the frame become axial forces that in turns reinforce the canopy’s stability. Instead of pursuing for a form, the canopy’s extreme span and thinness are generated by the dimensions and locations of the supporting steel columns.

The combination of perceptions and precise calculations landed in a design that resembles “soft matter”. Its vague precision recreates a type of sensuous attendance that is lost in typical industrial constructions. 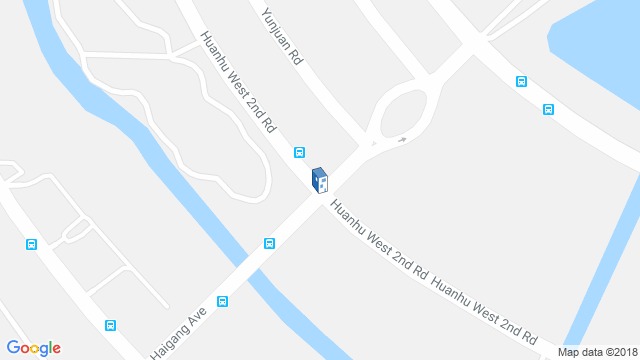 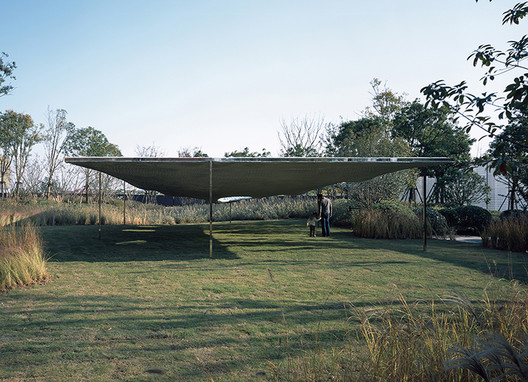