Text description provided by the architects. Roma-based architectural and urban design firm Studio Fuksas www.fuksas.com, led by Massimiliano and Doriana Fuksas, was selected as the design architect for the renovation of the 886,000 sq. ft. Beverly Center in Los Angeles, California. Thirty-four months of construction and five hundred million dollars later a reimagined Center was officially unveiled on November 2, 2018. The mall, a monolithic eight-story structure located at the edge of Beverly Hills and West Hollywood, now boasts a new glimmering white skin made of a highly textured stucco surmounting a metal mesh which changes transparency through the day and according to the viewer's vantage point.

Due to its sheer size, on a total land area of approximately eight acres, the Beverly Center could be very well considered a city block. The unusually large scale amplifies the relationship between the exterior and the surrounding neighborhood. The sinuosity, and the glossy white, of the metal mesh wrapping the entire perimeter, enables both absorption and reverberation of natural light. The exterior appears calm and diaphanous in the morning. Dynamic and fiercely contrasting in the afternoon. Dematerialized in a soft and wavy 300-yard long kaleidoscope at night when the mesh up lights turn on.

Inside the mall, the challenge was to increase the space permeability to the natural light. With this goal in mind, it was implemented a 25,000 sq. ft., gently curving, a high-performance skylight that triples the former roof sections opened to the sky. The reconfigured floor openings allow direct sunlight to reach with the same intensity all floors, especially the lower ones. Offsetting the floor openings greatly improved sight lines through the floors and the skylight. The skylight runs almost for the entire length of the roof acting like a river of light with its banks of shimmering metal panels made precious by a platinum automotive-finish paint and, at night, by a series of backlit micro-perforations. The combination of abundant well-modulated natural light and more permeable floor decks made the mall interior a much more pleasant space where the connection with the outdoors is never lost.

The four stories high Center Court, with an impressive 20 ft x 35 ft LED screen, was redesigned as a flexible space to host events, exhibitions, installations and to encourage the patrons to mingle and freely explore the mall which has been for decades an iconic fashion destination for locals, celebrities and international visitors. Pedestrian and vehicular circulation has been also greatly enhanced. A lush streetscape, with drought-resistant greenery, makes more pleasant reaching the mall on foot, or bicycle, while a state-of-the-art smart parking system dramatically improves the arrival and departure experience throughout the four parking decks. Studio Fuksas not only rethought the design of the new façade to improve the aesthetic qualities of the building but, beyond renovating the image of the shopping center, it also created new meeting spaces for the luxury market in California. 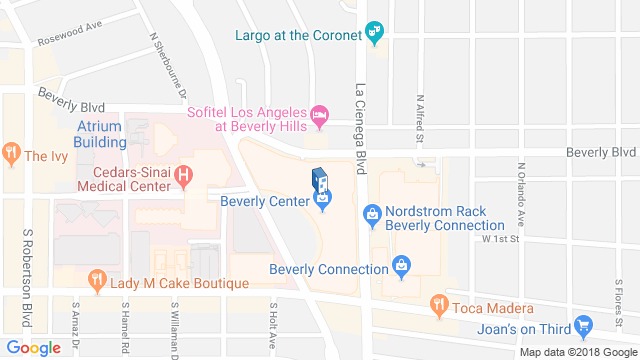 Location to be used only as a reference. It could indicate city/country but not exact address.
Share
Or
Copy
About this office
Massimiliano and Doriana Fuksas
Office
•••