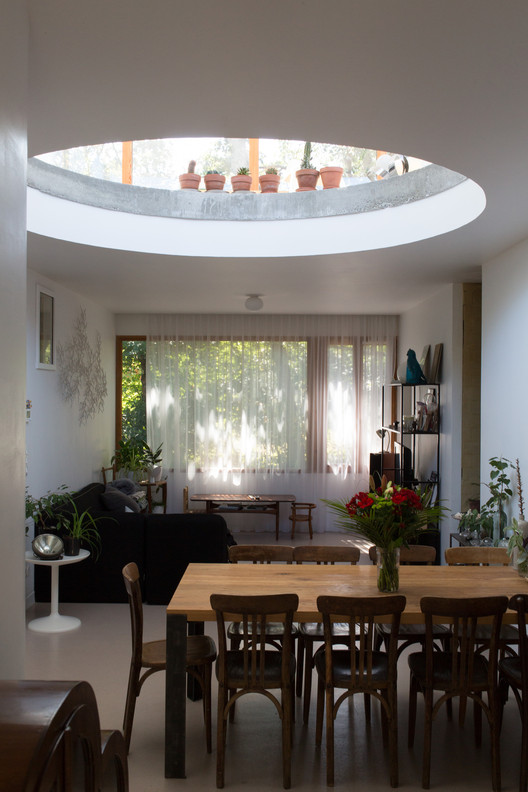 Text description provided by the architects. The violent debate between scholarly and popular culture that inflamed architects and the general public is at stake in the Winter Garden project. On the one hand, an open-minded project management, very attentive to the integration in the near environment. And on the other hand, urban regulations based on a local mimetic town plan with generic subdivision bylaw.

Originally, the building site was located nearby a park of the eighteenth century, a manor house and a magnificent kennel of the seventeenth. These elements has fed the project all long the design process. The drawing of the impasse came after, in the last sketches, because the site has been reconverted as an housing estate, growing years after years. The house was uncompromising suburban.

The Winter Garden is based on square plan, whose the frame is irregular; the four posts are anchored at four meters depth in the clay soil. On that plan, the sequences of everyday life are separated.

The four corners are individual spaces including the parents' room, the children's room, the mother's psychoanalysis room and the father's studio. There are split apart by a large common room, north / south / east / west oriented. It is somehow a neutral area, open to discussion, maintaining distance between the individual rooms.

As the house has no outdoor terrace on the ground level and as it is a ground level house, a hanging winter garden enable the immersion in the landscape. The winter garden is located on the ceiling of the large common room creating the fifth opening of that space. It connects the kitchen with cedar.

In several months, the park has become a subdivision.
The winter garden, at the end of the impasse, has a slightly different silhouette compared with the repetitive theme of the cataloged house. It brings an intriguing variation without giving lesson. Has the neighborhood noticed his presence ?