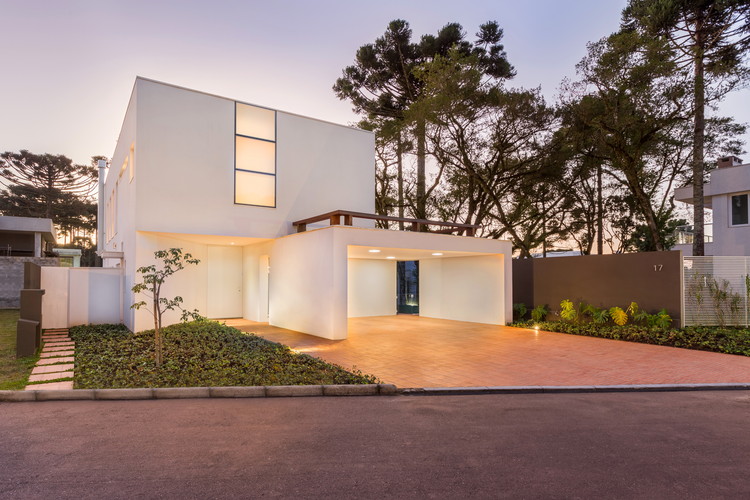 Text description provided by the architects. The DW house was designed for a former client and friend, we had already made the design of his first apartment, and now, with the prospect of increasing family, he gave us the joy of designing his new home.

It is a mass architecture, what you see from the street is a closed and mysterious volume, and an oblique wall leads to the entrance. In the background it is the opposite, the house opens to the yard and the light.

The house arrangement was compact, with the intention of disposing of a kind backyard. We solved the plan according to the insolation and created the relationship with the garden and the openings according to the needs of each room.

The project localization is in a high standard neighborhood, Santa Felicidade, in Curitiba. Since the beginning, two conditioners guided the project: the site’s front was diagonal, and there was a large araucaria (a tropical Brazilian native pine tree) in the backside of the lot. With this in hands, we decided to leave the recreation area in the back with the native tree, using landscape features to accentuating it.

Also, about the diagonal front, the project took advantage to generate a mysterious access at the same time it does not immediately reveal the door, and even with the oblique access, the house is a pure volume in a balance between its white and clean exterior and its solid settled form.

The volume lies on a brick’s base, relating this pure and timeless architecture with the old and ethereal soil. In the main facade, the only opening is a window in translucent glass, which in addition to protecting the privacy of the interior, makes a vertical counterpoint to the facade.

The implantation of the house also took advantage of the orientation of the land. All rooms were north facing, with the best solar orientation and the pool facing west, enjoying the afternoon sun. In the master suite, there is a large balcony to the east, which acts as a cover for the garage.