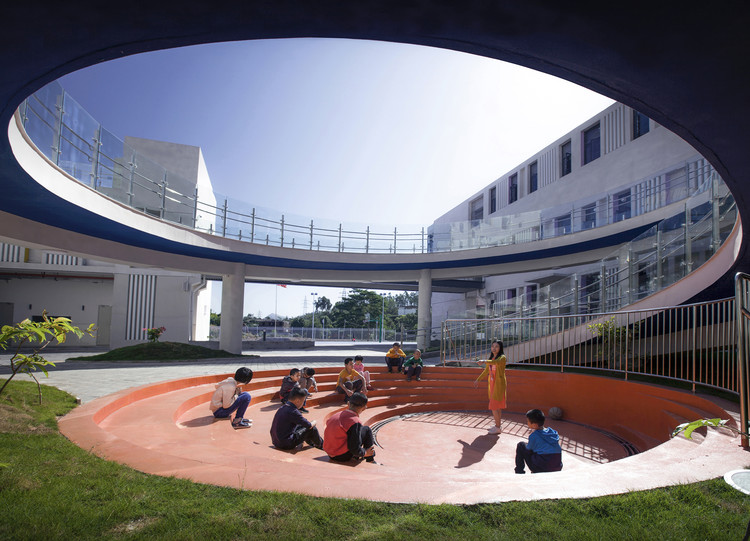 Text description provided by the architects. The special education, on the one hand, the school implements the teaching mode of combining “medicine and teaching”, at the same time, the design requirements of the relevant codes are more detailed and strict, which has a great impact on the design; on the other hand, due to the particularity of the educated groups, this kind of schools pays special attention to the work of management, which means safety by strengthening management. However, whether the students really need and like the homogeneous campus space, the fixed learning behavior and the learning place is a question needed to study.

Since students who need special education feel different from other children and lack self-confidence, they have difficulty in normal communication with others, which leads to inferiority complex and autistic. Therefore, it is very important to develop students' normal communication ability for their physical and mental development. However, it is difficult to induce communication behavior in campus space which is homogenized and neglects the personality needs of students. As for it, we try to make changes and design the campus space that children really like in the project of school with special education of Heyuan City, Guangdong Province.

The "village" in the village
The project is implemented in Heyuan City, Guangdong Province, with 126 design degrees, in which the students are aged six to twelve. The base is in a high-density residential area at the bottom, and most of the children recruited by the school are from it. Two or three stories of closely related small houses and the winding village road are the elements most familiar to children. Therefore, the design starts with the prototype of "village", so the school is divided into a number of small buildings according to its function. According to the free arrangement of the boundary line of the land, the inward activity courtyard is made as much as possible. The low level and high-density campus space characteristic, the flexible body mass layout, and the surrounding village complement each other. From village to school, the natural transition of spatial scale will strengthen students' identity to campus space.

It is worth mentioning that the southwest side of the original base has a small mountain package about 10 meters high that extends to a third of the area inside the site. As a result, the design wants to be based on the slope, so as to arrange various functional blocks on the hillside. However, a city road will be built on the north side and the south side of the land in the future and the mountains occupied by the road will be leveled. As a result, the hillsides within the land area are so small and isolated to be abandoned, which is really a pity.

The "home" in the school
With the development of the city, the fate of the surrounding residents is unknown. The architectural language of the school tries to preserve the original memory of "home" for the children. For each function volume, it uses different slope top forms, which forms the unique small house, so as to enhance the marking. In the aspect of facade design, the exterior wall of the building is mainly white and complement the shallow hues of the surrounding residential buildings. The east and west walls also adopt square holes of the same scale as the residential buildings, which are scattered freely on the white walls. There is no lack of modern feeling while reflecting the characteristics of the houses. The small houses, connected by natural and gentle corridors, flow between buildings like winding village roads.

We reproduce the "slide" prototype in children's hearts by design, in which a shared spiral ramp at the center of the courtyard will be designed. The shared ramp is designed according to the unobstructed slope of 1:12, and the plane gradually shrinks in a spiral shape. The starting point of the ramp is directly opposite the main entrance gate, so that the children can see the ramp entrance as soon as they enter the campus. The ramps and corridors are like a chameleon lying on top of a building, and the ramp is the tail of a chameleon.

As the morning sun rises, parents take their children down the ramp to the second floor of the classroom; after school off in the evening, the parents hold their children down the ramp to go home accompanied by the sun setting slowly. They learn by sunrise and rest by sunset. It seems to add a little bit of ritual to go and leave school, which is the most basic behavior. The ramp is originally designed for children to use, and parents also experience it since they had to pick their children up. For the circle of the ramp, it is the life of two generations. 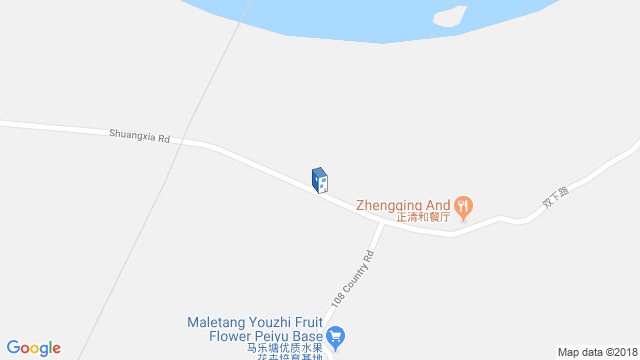 Location to be used only as a reference. It could indicate city/country but not exact address.
Share
Or
Copy
About this office
Architectural Design and Research Institute, South China University of Technology,TaoZhi Studio
Office
••• 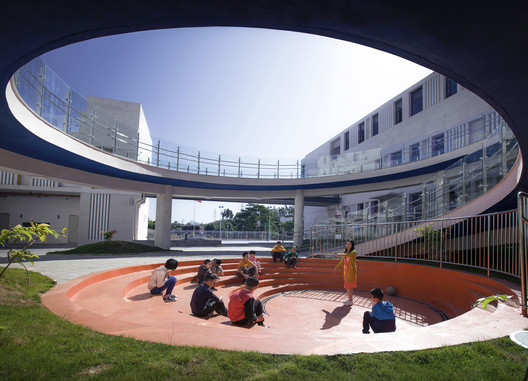