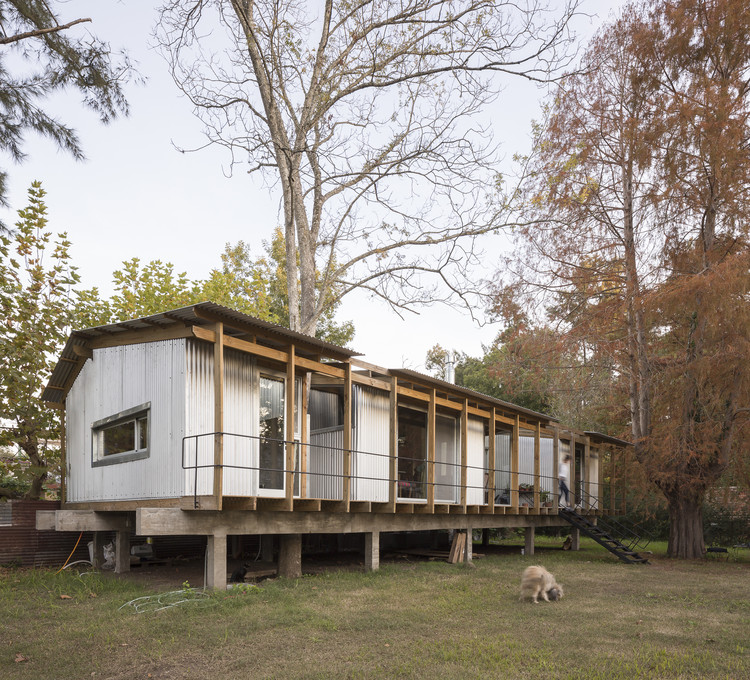 Text description provided by the architects. Dique Luján is a small town in the Province of Buenos Aires, located in the northern area of ​​the same and bounded by the Luján River and the Villanueva Canal. It is a town that meets the characteristics of the typical villages of the "Delta"; lowlands surrounded by large mirrors of water that favor the development of abundant vegetation and tropical character. These geographical and environmental peculiarities have had a direct influence throughout history on what is usually called "Architecture of the Delta" and we consider it necessary to study this dialogue at the time of approaching the project.

The plot is characterized by the proximity to the Luján River, (whose channel undergoes sporadic growths marking a maximum flood level of one meter above zero levels) and the presence of several arboreal specimens, including a Pecán Nogal and a Bald Cypress typical of the Delta of the Parana.

These data were decisive when locating the house in relation to its environment; both horizontally, respecting and incorporating the existing vegetation, as well as vertically, locating the floor level above the flood level. This last condition refers directly to the character of the traditional constructions of the Delta, dissociating the plane of inhabiting that of natural expansion.

The house is implanted longitudinally on the south side of the plot, taking advantage of its size and releasing the largest area of ​​land towards good orientations. Both the programmatic disposition and the section of the house respond directly to this decision. The service places posted on the southern limit and the main ones on the opposite, gaining orientation and opening towards the land.

A longitudinal circulation in which instances of storage, distribution, and arrival occur, makes the boundary between smaller and larger rooms while coinciding with the position of the ridge. In this way, there is an asymmetry in the section of the house that is reflected directly on the roof skirts. This is projected of free runoff and steep slopes due to the presence of deciduous specimens.

Three patios interrupt the continuity of the roof. The largest one marks the arrival at the staircase from the ground while at the same time it functions as an exterior expansion space. "The Walnut patio" surrounds the existing tree preserving it and incorporating its trunk into the interior landscape of the house. Finally, an empty space coincides with the access hall to sift the visual relationship with the neighbor.

A gallery of constant depth, except when merging with the access patio, runs through the entire front of the house and refers back to the island's architectural character. Since there were no restrictions to access the lot with traditional transport, the separation of the house from the ground is solved by the execution of three reinforced concrete beams that supported on a series of shafts refer to the typical palafitos of the Delta islands.

A succession of wooden structural frames is placed on the beams. They limit both the interior and exterior spaces, being at the same time a supporting and spatial structure. This constructive logic moves away from the traditional Baloon-frame system, allowing flexibility in the assembly of the interior and exterior spaces as well as in the dimensions and quantities of window treatments. 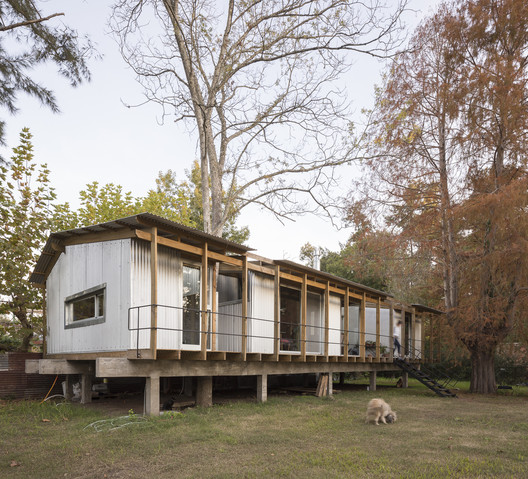