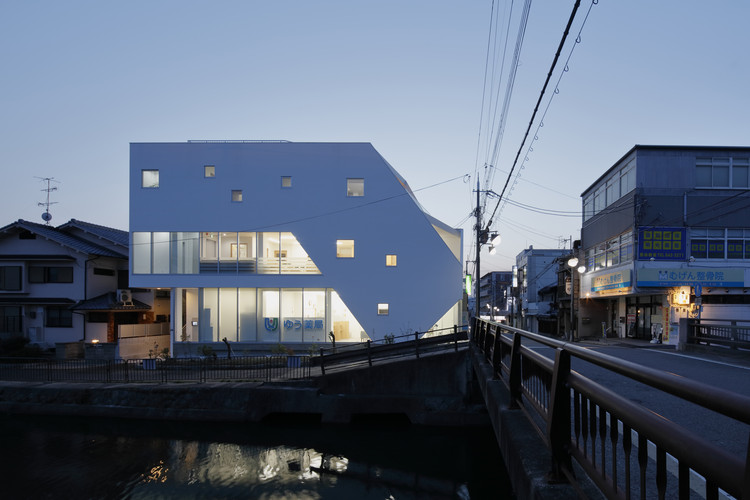 Text description provided by the architects. This architecture might remind you of the images of
Kanoko, a fawn drinking water,  “Kanoko” means a young deer in Japanese
Like a collar of a Kimono
Like Origami, folding paper work
A huge thumb pointing to the ground
An asymmetric shape

The site is situated on a corner, so you can see two facades of this building. This is the first building that catches youｒ eyes when you get out of the station. Accordingly, we have designed this building not just as a simple cube, but as a funny and interesting form composed by two sides of the façade in order to make people create various images. It is designed sharply, clearly and dynamically. The name of this place is Sumizome-Cho, Fushimi-Ku in Kyoto city. This building has three stories made of a steel structure. The first and the second floor are for tenants, a pharmacy and a nursery school respectively. The third floor is a residential space for the parents of the client.

The north side of this site faces the main street of this neighborhood. There is a bridge east of the site, which connects the site and the main shopping street. The railway station is just 5 meters away from here. A small canal runs along the site. It is named “Kamogawa-Unga,” one of the branches of the Lake Biwa Canal, which was constructed during the Meiji period. This man-made waterway reminds neighbors of the history of the development of this area. This is one of “the traces of Kyoto’s dream.” It will be explained below. Our young client was born in this place and is working in Tokyo now. His parents ran a vegetable shop, but they felt they were too old to keep it and decided to close it down. Their house for working and living was dilapidated, so their son, i.e. our client decided to rebuild it.

The program was very clear. The first and the second floor will be designed for shops or retails, and the third floor is a residence for his parents. In the future, he might come back to this place and will have his own office in this building. Our client believes that this town should be changed to a more beautiful place. When he was looking for an architect, he noticed an interesting building in his neighborhood. It was an apartment house named “Slit Court” designed by our office, the Eastern Design Office. Our office is also along this canal and we are neighbors. The “ Slit Court” built along the main street is just 15-meters west from this “Kanoko House”. This site is a nice viewpoint seen from the station near a small canal.  From this place, we can get a wide view of the main street and the canal. We have suggested several designs and the “asymmetrical form” was the one our client preferred, saying this irregularly shaped design is beautiful.

The first and the second floor for shops face to the canal with a glass facade. The third floor is rather enclosed and we have designed small windows at some points to get the light and sight. The idea of the entire shape is to cut a part of the north corner diagonally and make terraces in that area. We intended to make the volume of the three-story building into one controlled design, yet each tenant floor is open to the town to let them interact lively and actively. At the pharmacy on the first floor, moms and kids are able to play in a kids corner provided in front of the canal. That is where the tip of the diagonal cut west facade and the ground meat. At the nursery school on the second floor, you can see the kids playing. In the evening, the lighting of each floor is gently shining and at night, lighting from the small windows rhythmically flourishes. About the canal “Kamogawa Unga“, “a trace of Kyoto’s dream”.

Before the Meiji era, the capital of Japan had been in Kyoto, but it was transferred to Tokyo as a result of the Meiji Restoration, which consequently leads to the decline of Kyoto. Therefore, people of Kyoto decided to construct a new Lake Biwa Canal for tapping water, waterways as transportation artery and waterpower that would stimulate new industries to trigger the revitalization of Kyoto. At that time, most of the civil engineering construction was designed and supervised by foreign engineers, but these canals are the first project that was carried out by the Japanese engineers only. There has been a hydroelectric power station 1 km southwards from this site. This canal has played a key role as a basic driving power to contribute to thriving newer industries such as spinning, stretching copper panels, machinery, Tobacco and so on. Our client named this building “Kanoko building“ from the image of the fawn/young deer drinking water next to the bridge over the small canal. 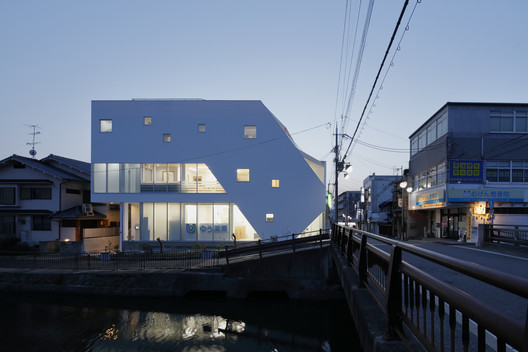