Save
Revolutionary Nature: the Architecture of Hiroshi Sambuichi
Share
Or
Copy

But despite the ubiquity of these natural rhythms, we spend much of our lives working in opposition to them. Buildings and the way we inhabit them particularly threaten this. We breathe in canned and stale air, work in deep floor plans that do not reach natural light, and keep waking hours out of sync with any natural calendar. Architecture may protect us from the unpleasant parts of nature, but it separates us from everything else, too.

If this seems inevitable, it’s simply because you are not looking closely enough. Hiroshi Sambuichi, an architect based in Hiroshima, Japan, has over the course of his career developed a portfolio of work distinctive not for form or ideation, but for its profound connection to context.

Much of this comes from his upbringing in Hiroshima and the Seto Inland Sea region, an area that was devastated by the atomic bomb in 1945. “It was said that trees would not grow for 70 years after this,” explains Sambuichi. “But the flowers bloomed again the next spring.” The area has grown from an affluent city to a lushly green one due to its advantageous climate - one that is celebrated and supported in local traditions. “I grew up [here], so every New Year’s I climbed Mt. Misen to watch the sunrise for the first time in the year. I noticed from [there] how the mountain interacts with all the surrounding moving materials.”

These transient but contextual relationships to nature are what form the foundation of Sambuichi’s architecture. Sambuichi revisited the site of this yearly tradition to build the Mount Misen Observatory, a small, hipped-roof structure that provides a lookout point to the surrounding range. Where other architects might have seen respite space as an opportunity to pack the structure with places to sit, eat, and drink, Sambuichi built a space that encourages visitors to see the changing light, feel the shifting wind, and hear the echoes in the canyons. It’s a reminder that architecture can serve more than just man-made program.

Sambuichi was recently awarded the Daylight Award for Architecture, a prestigious accolade that recognizes architects and researchers who uniquely draw upon the power of daylight in their work. Presented in concert by Villum Fonden, Vellux Fonden, and Velux Stiftung, this year’s ceremony took place in Lausanne’s Rolex Learning Centre. The choice of venue was an apt one.

Not only were the building’s designers (SANAA) laureates of the same award just four years ago, but the space itself is an example of the poetry made possible in the marriage of architecture and daylight. But, like in so much of architecture, light acts upon the design rather than within it.

For Sambuichi, sun, wind, and water are not added parts, but essential ingredients. He specifically calls them ugoku sozai (moving materials) - a term that hints at both their necessity and their transience. To understand these materials is a long and painstaking process spent observing the most seemingly minute details such as how often the direction of wind changes or where the sun feels most intense during each season.

For Naoshima Hall, a community center project in the Honmura district of Naoshima, the research process took more than two and a half years. A tight collaboration between architect and citizens, the building rediscovers local architectural traditions. An examination of the older houses in the area revealed that floor plans were consistently laid out on a north-south axis and that the arrangement of the houses together allowed wind to move through the town on the same axis. Together, the arrangement seems less like an urban plan than it does like a machine. Every space is designed to take advantage of the existing currents, no extra air conditioning is needed.

It’s not needed at Naoshima Hall either, though this isn’t common in the region’s more contemporary structures. Every angle, geometry, and material is designed to harness natural energy. An opening in the hipped roof allows the southerly winds to pass into the space, eliminating the need for additional air circulation. It’s a simple solution that required a profound knowledge of the site - but as the impact of artificial heating and cooling becomes increasingly detrimental, it’s one architects might be wise to learn from.

The project has been widely praised by the architectural establishment, though its unassuming appearance might have encouraged the casual reader to scroll past it. But to Sambuichi, the success of the building is in its use by the residents of Naoshima. It is regularly in use by citizens of all ages for a wide variety of activities. Today, when so much value is placed on the ability of architecture to be adaptable, perhaps we’d be wise to look back at traditional architecture and use contemporary technology to support its existing strengths. Why use our finest resources to create stale, cut-off structures when we can create ones that seem to almost breathe with us.

Sambuichi is hopeful about these possibilities. “My architecture draws upon what already exists,” he says. “[For me,] the important thing is to connect to what we have. Buildings perhaps cannot be alive themselves, but they can be close, as part of other living things.”

In an extraordinary video developed for his Inujima Seirensho Art Museum project, a bubble moves through the interior spaces of the building propelled only by the natural circulation of air. It is a testament both to the delicate, controlled interior climate and a quietly rebellious way of illustrating architecture. Buildings are inhabited not just by people, but by the revolutionary nature of sun, wind, and light. 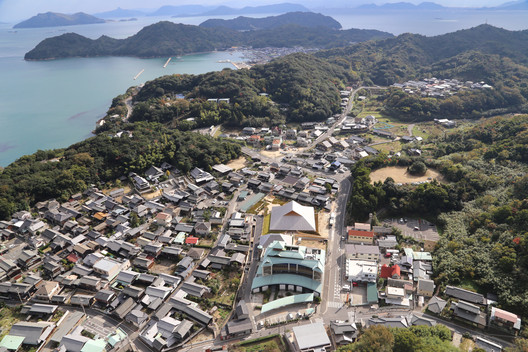