Herzog & de Meuron have revealed their plan for a new summit station atop the Swiss mountain Titlis. The Alpine masterplan entails the new construction of the summit station, the redevelopment and extension of an old beam antenna tower, and an upgrade of the Titlis underground tunnel. The design aims to breath new life in one of Switzerland’s most renowned international tourist attractions.

The existing summit station was built in 1967, and despite several modifications and expansions over the last 50 years, it no longer fulfills current and future requirements. As a further modification would not optimize the situation in a sustainable way, the summit station will be entirely replaced by a new construction. The project articulates a process that is transforming Switzerland into a complex urban landscape.

Herzog & de Meuron stated that: "Many mountains and glaciers in Switzerland, no matter how high or remote, offer panoramic views, cable car stations, Alpine huts, restaurants, and accommodations. It is taken for granted in Switzerland that practically every square inch of the country is accessible by car or train, by gondola or bicycle – anywhere and everywhere, in city and countryside. As a rule, however, our beautiful high-altitude outdoor locations have been fitted with purely functional buildings for the transport and catering of visitors. Rarely do they display any architectural ambitions, with the exception of hotels, for the most part of reasonable height, which were built in the days of an emerging tourist industry near the villages down in the valleys."

The Titlis attracts over one million visitors a year and up to 2000 a day during peak times. The station project belongs to a new generation of Alpine architecture that aims to do justice to the country's breathtaking landscape by ensuring a corresponding architectural experience. 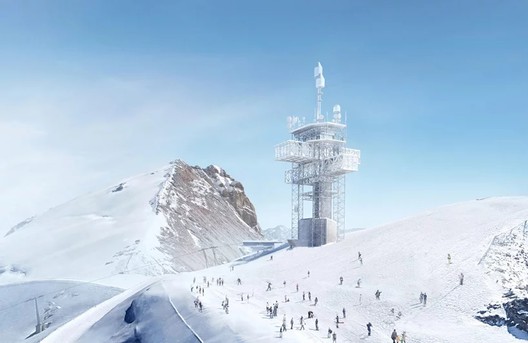