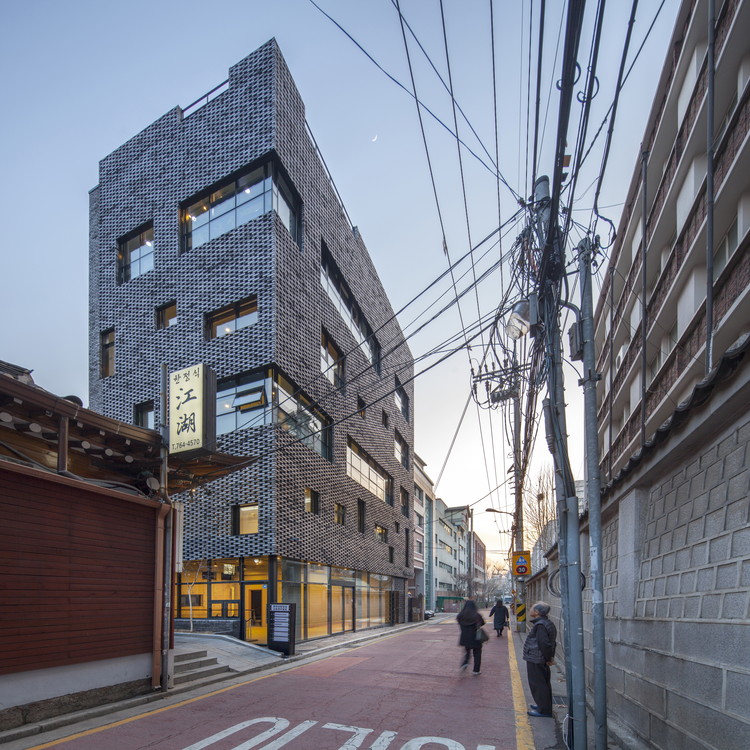 Text description provided by the architects. The site has a special locational characteristic called Jongno and, at the same time, is adjacent to Unhyeon Palace, which is one of the ancient palaces of the Chosun Dynasty. Located at the end of the secluded alley crossing from prosperous Iksun-dong to Insa-dong, the pre-construction site is about 128.98m² in area and used to be a general commercial area. The client, who was running a psychological consultation institute and living in Gangnam, the complete opposite of Jongno in local color, has always been fascinated about Gangbuk and Jongno.

Hence, when he contracted the land and asked for the construction design, he insisted the construction be harmonious with both the local color of Jongno and surroundings. Despite its use as a general commercial area. There were restrictions on the number of floors and the height(limited to 5 stories and 20 meters) according to the regulations of this area. So, in order to overcome this limitation, we had to pass deliberations related to architecture and cultural assets. Looking around, the remains of old things still remain. Across the street, it faces the fence that surrounds Unhyeon Palace and Jongno Campus of Ducksung Women University.

The roads are frequented by tourists as well as local residents. We thought that the new architecture in this area was easy to counter the urban context. It may be that new things have not happened, and modern architectural elements can be. Although the main office of the building is a rental office, I hoped that I could easily see the view from the inside of the building and hoped that the building would not be like a stranger from the outside. Because of small ground, we could not afford to reconstruct the MASS of the building. So, we focused on the design through the FACADE construction and we decided to construct the FACADE of the building using the most familiar traditional material, brick. We wanted to organize itself so that it can be modern and well compatible without being too old.

This is because the natural light falling on the brick net constituting the shell is absorbed into the inside, and the artificial light inside is broken through the brick net in the evening. The gates that reflect the image of net bricks are uncomfortable, and the brick finish on the hall-floor matches the image of the building. Light breaks through net bricks of the staircase hit the wall. By itself, it is a great decoration of the wall. Also, there is a small garden on the rooftop so that users can relax and enjoy the surrounding scenery only available in Jongno. 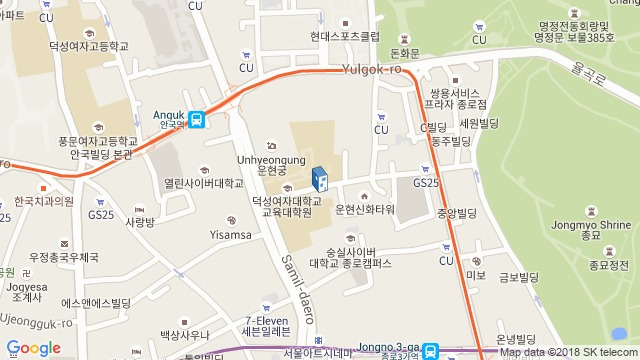 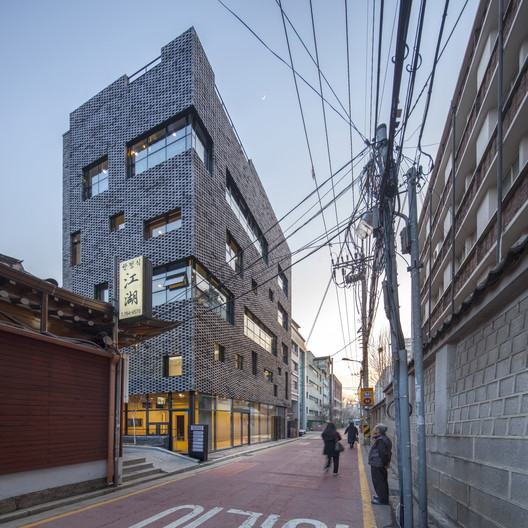