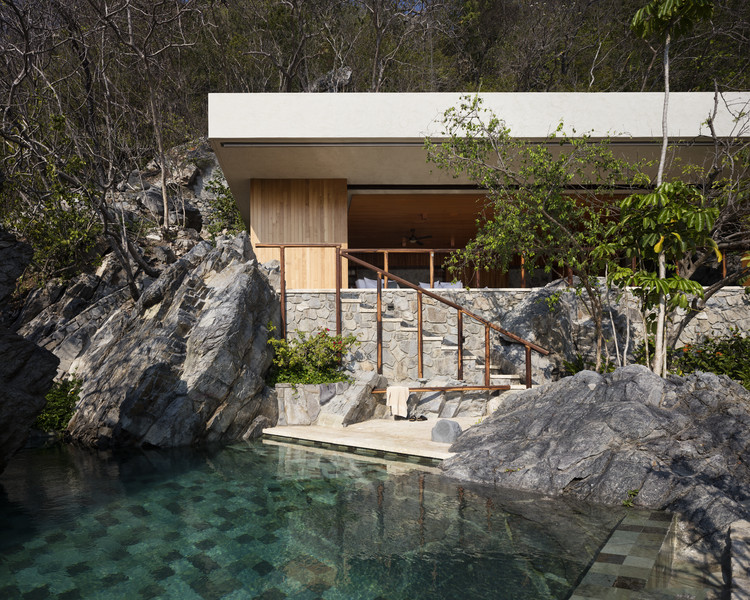 Text description provided by the architects. Throughout history, we have seeked to satisfy the spatial needs of humankind through architecture, often turning our backs on our primeval home, earth, and thus ignoring that the relationships between the elements of its nature define and determine space, and set the first guidelines for architecture. This project emerges, in a conceptual way, precisely from those relationships and it is inspired in the mutualism that nature can achieve allowing for life to exist even in the harshest of conditions.

The site, in its natural state, is a heavily vegetated and rocky slope, dominated by endemic species that thrive in the mineral coldness and that grow intertwined with the rough hillside. This state submerges the individual in a very particular atmosphere that inevitably forces the view towards the ocean, constituting a scenario that would set the basis for this project.

In its origin, the program was thought to include the creation of a palapa and a pool; in other words, a roofing structure raised above the ground to protect from sunlight, and a hole in the stone to contain water. Nonetheless, with this idyllic scenario, imposing the program upon the site as if it had fallen almost randomly resulted pointless. The somewhat unconnected roofing structure of a palapa was rethought with a cover that would extrude from the mountain itself towards the ocean, while the water should flood the stone to generate the pool, almost in a way of a pond remaining after the turning tides.

Therefore, the slope of the site was to be redirected with a flat cover that seeks to mimetize with the surroundings, and that generates the interior space beneath it. While trying to always maintain the relationship between built and wild, the indoors opens completely to allow the breeze and the red sunset light to inundate the space, aided by the hues of cedar covering the walls.

It is however, the cover on itself that results in a mutable space that transforms into a true viewpoint overlooking the immensity of the horizon during daytime, and an observatory for the stars at night time, favored by its position afar from artificial light sources. These unexpected functions constituted a sort of a gift for the users.

A terrace with the sole purpose of the hedonistic pleasure of feeling good and calm in the presence of the continuous dialogue set between natures, was then generated. The building invites the spectator to form part of this dialogue through the materials obtained from the site itself, as well as through stone and greenery, that establish an Indi sociable relationship with the place; similar to the relationship between a bare foot and sand.

Seen from afar, the architectural ensemble integrates fully with the landscape, highlighting the sand-colored thick fascia of the cover protruding from the rock almost like an accent above nature, which does not alter the essence of it, but rather transforms it and confers a new meaning. In the end, it turns out to be pretty much like the mark on top of the spanish letter Ñ.