Amsterdam-based architect Angelo Renna has designed a 90 meter high artificial 'sponge mountain' made to absorb CO2 in Turin, Italy. Formed from soil excavated from the construction site of the railway tunnel connecting Turin to Lyon, the mountain aims to improve air pollution through engineered soil. Mixing sand and concrete, the man-made mountain is designed as a green landmark for the city.

Combining the idea of environmental impact with space for leisure, Renna's Sponge Mountain would create a new recreation area in Turin for the public to exercise, relax or see the city. With a surface of 11 hectares, the mountain would rise above the cityscape and provide views across Turin. The proposal builds off the idea that the construction of the TAV railway will created 6 tons of soil and utilizing the stored calcium carbonate.

Through multidisciplinary research, Renna believes the proposed mountain has the capacity to sequester CO2 in an inorganic form at a rate of 85 tons per hectare per year over five years. Compared to a hectare of rainforest which absorb 5 tons per hectare per year, the project could create a significant impact in the city. The Organisation for Economic Co-operation and Development has estimated that the Turin metropolitan area has a population of 2.2 million. The Sponge Mountain project could help absorb CO2 as Turin continues to expand and urbanize. 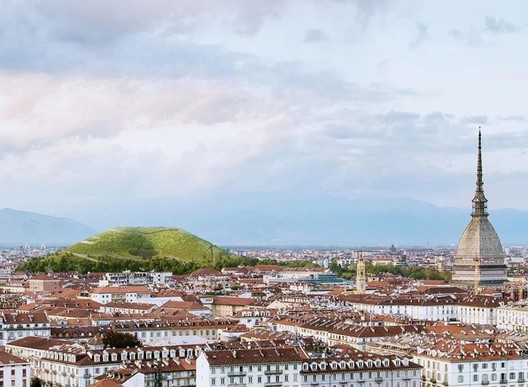