Paul Rudolph, despite vaulting to international success in the early 1940s and 50s for his Brutalist structures, saw an abrupt end to the popularity of his signature style as postmodernism gained prominence. As tastes shifted to different fare, so too did Rudolph's approach - leaving a number of  his unbuilt proposals to gather dust. 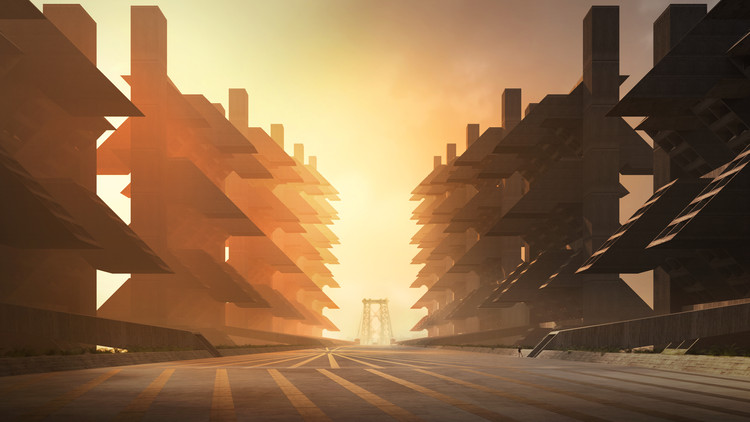 In the celebration of what would be Paul Rudolph’s 100th birthday, designers Lasse Lyhne-Hansen and Philipp Ohnesorge revisited one of Rudolph's most famous unbuilt proposals: the Lower Manhattan Expressway.

“LOMEX REVISITED” places the LOMEX study in an alternate universe, seeking to “search for the beauty in this hated, unbuilt masterpiece.” The project, which was revealed to the public, was quashed by efforts led by urban activist Jane Jacobs - a fate that even Rudolph agreed with.

Rudolph's LOMEX, commissioned by the Ford Foundation, was part of a study on the implications of the Lower Manhattan Expressway, a Robert Moses proposal for a Y-shaped highway that would have connected Holland Tunnel to Williamsburg and Manhattan Bridges, demolishing much of SoHo. Through the LOMEX, Rudolph created a megastructure with such intensity that the road infrastructure would become irrelevant. The expressway project was canceled in 1971.

For LOMEX REVISITED, Lyhne-Hansen and Ohnesorge focused on two areas drawn in birds-eye perspective sections, inspired by iconic imagery from Rudolph publications. Rather than competing with the original drawings, the new imagery takes eye-height perspectives, “trying to capture the epic image as well as the everyday scenes to experience the many facets of the space.”

Through the work of translating the drawings to 3D many blanks and inconsistencies were encountered, which is natural for a project that is a study rather than an actual building. The inconsistencies were navigated by researching Paul Rudolph's built work and projects and combined the available drawings aiming to bring out the best of the project.
-Lasse Lyhne-Hansen

Retaining an element of abstraction, materials are not specified nor obvious, remaining true to Rudolph’s methodology. Necessary objects such as handrails and staircases are designed as “combinations of similar objects from his other buildings and whatever indication the drawings would offer.”

More information on the scheme, and Rudolph’s work, is available via the Paul Rudolph Foundation, who work on the digitization of Rudolph’s work to make them easily accessible to the general public.