Text description provided by the architects. The house was thought based on the attributes of the north-west slope where it is located and the difficulties of the sloping construction. The land has a ratio of 1:10 from the road to the change of waters between the Cajón del Arrayan and the Cajón del Cerro Pochoco -in the outskirts of Santiago-, conserving flora and fauna endemic to Chile. It goes, in ascending form, from quillayes and litres, in the low part, until puyas and cactus in the top. On the hillside rise the warm wind currents of the afternoon, attracting the flight of different birds, including eagles and condors.

The house is inserted in this relationship between the soil and the wind of the pre-Cordillera.

After several observation and measurement visits, a tree-free place was defined -at an initial height of the site-, in which there is an open view of the nearby valley and the distant city.

A reinforced concrete base is proposed, stabilizing the ground in a large horizontal, with two terraces-miradors at its ends. On this topographical piece - which isolates and protects - a light and regular metal structure with axles at 3.2 meters is mounted, in whose grid the spaces are ordered.

This constructive and spatial logic is modified by the route of the sun and the distant views, incorporating a second order, configured by four oblique walls that orient the gaze and regulate solar radiation and winds, while allowing a continuous journey through the exterior perimeter of the house, always related to nature and terraces.

This external route is complementary to the interior route, which leads to a third and last terrace on the second floor that, like a bridge, returns to the continuity of the hillside where the Andes begins. In this way, the house maintains the two magnitudes with which these hills have traditionally been inhabited: the daily one -of smaller sizes and recurrent activities- and the geographical one -of larger sizes and occasional visits-.

The exterior walls -with internal chambers of natural ventilation- are painted black, like the trunks and shadows of the trees, prioritizing chromatically the different greens of the foliage. Inside, natural light is regulated with varnish and white according to the entrance of light to the enclosures and the reflection of the floors. 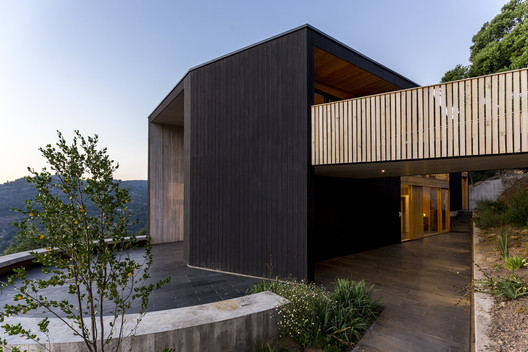