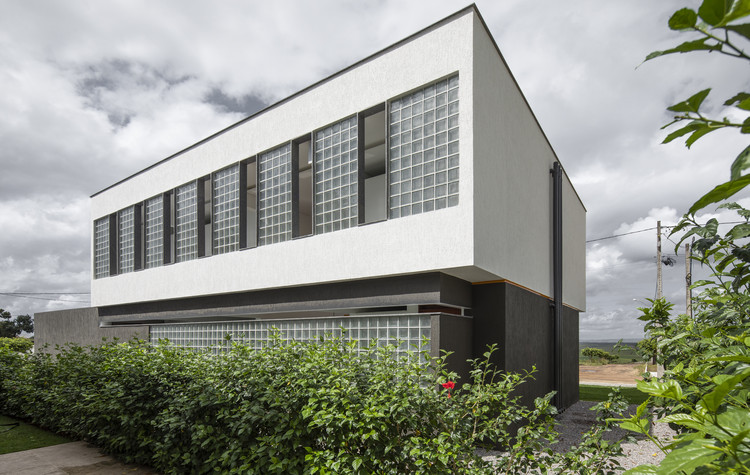 Text description provided by the architects. The M16 House is located amidst other homes in a gated community in the town of Carpina. In order to meet the clients' needs, the project provides a weekend house to host, reunite and be the occasion for family gatherings. As an immediate response to the 30m x 15m corner lot, the two regulating track floors follow a pragmatic division in the layout of the environments with a continuous design.

There is then the multiplication of perceptions and the appropriation of the site through the sequence of open spaces integrated into the natural landscape of the zone of the forest of Pernambuco, which reveals itself as a true scenario in front of the largest tested house. Having taken as a party a sequence of open spaces, attributed better ambiance in consonance with the place of predominantly southern solar orientation.

The pedestrian access of the house is led by a void, which receives a suspended staircase and establishes the connection of the social and service areas on the ground floor, and with the intimate area concentrated in the suspended prismatic volume. A large terrace on the corner appears as a design premise, welcoming the protagonist space and longer stay of the family. The shade designated by an expressive metallic pergola on galvanized steel plates painted in yellow indicates where three generations will be able to live and share their experiences.

The few walls in the ground floor and the rigor in the floor plan of the first floor allow closings that in a continuous and sequential way, talk among themselves to the horizontal yellow plane of the imposing pergolas. In these, the essence of the house is made, harmonizing with the blue of the hydraulic tiles and untying of the whole. This set of yellow and blue elements, present on the terrace and crowning of the building, is joined to the strong geometric rigor of the straight lines and compose pure volumes that seek to grant identity to the work.

Another notorious element in the composition of the house is the set of glass blocks arranged in different arrangements, solving questions of privacy and control in the passage of light contained through the translucent surface of the material. The structural system adopted was reinforced concrete, traditional and common in the region. The modular coordination was followed to the letter and guided the architectural conception following a structural reasoning, whose structure expresses a frank and direct relation with built formal party. The M16 House conveys the feeling of welcome to its guests. Whether for the minimal affective decoration or the regional touch of a genuinely simple and honest architectural language. 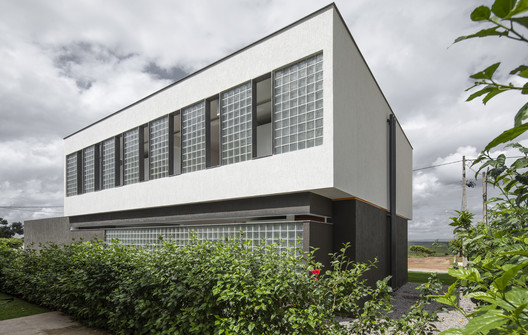