Orange Architects + KCAP have created a Golden City Block for St. Petersburg, Russia. Bordering the Finnish Gulf, the new urban development is part of Vasilievsky Island. Three of Orange and KCAP's projects in the development are already underway, including the towers of block 6, as well as construction for block 7 and block 8. Inspired by the morphology and structure of St. Petersburg’s city center, the design utilizes urban blocks with enclosed gardens and courtyards. 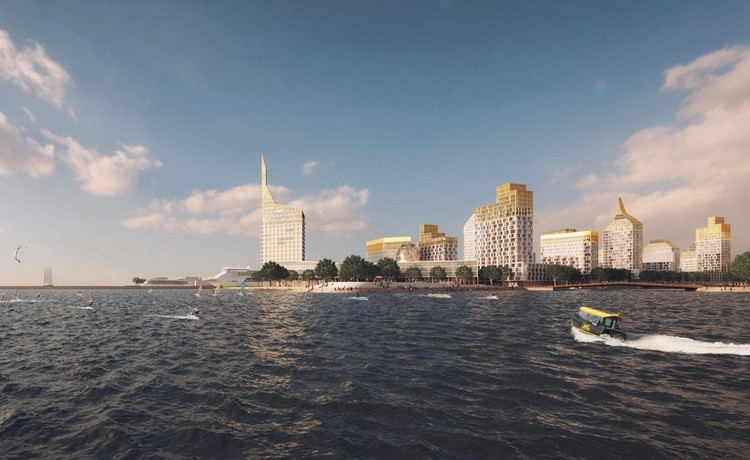 Block 7 consists of one 6-storey perimeter block with three 17-storey towers on top and includes two courtyards: one enclosed and one open. The building has one underground level, while on the first floor there is commercial program and five residential floors are located above. Monumental arches are connect the courtyards with the streetscape. One of the highlights of Block 7 is the open courtyard facing South.

As the centerpiece of the plan, golden tower spires spring up from the facades below through a refined transition from square to triangular framework. The spires are finished in a golden color, and grow as Fabergé-like patterns to give the blocks their expressive, recognizable, and iconic character. The open space theme for block 7 was created in the St. Petersburg tradition, including courtyards and green streetscapes. The “luxury” and slight formality of the open spaces is inspired by the palace gardens.

This classic urban setup offers shelter and protection from the wind coming from the sea and generates a variety of public spaces and different environments. The 15 hectares site will become a new part of the city and the face of St. Petersburg when entering from the sea. 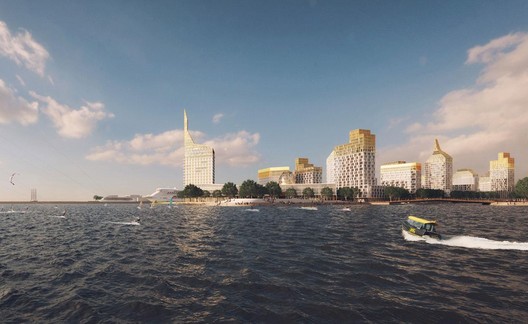