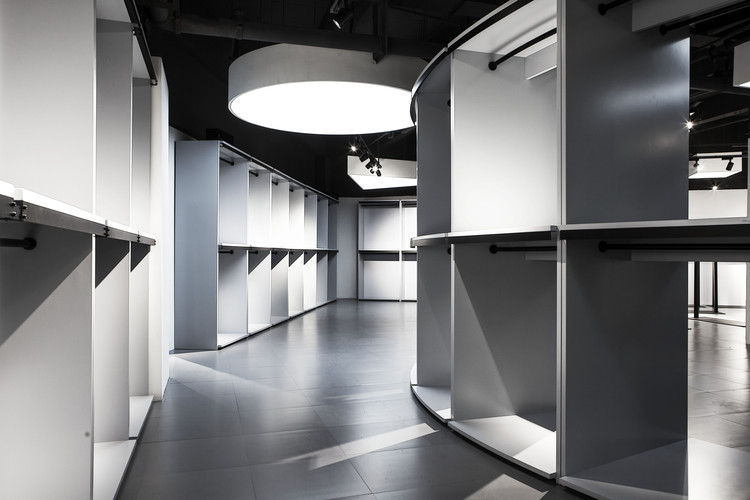 “Folding Settlement” is the working title for Interior design of newly found brand F3.stu. The name came from its spatial characteristic and the source of the operating. The brand F3.stu focus on Leather clothing business and urgently need a new store in concise and sobriety to reach out the contemporary fashion. At the first meeting, the owner suggests an open storefront combining following linear space for attracting the customer into several selling area. In the precondition of area limit, the request indicates the folding of inner space. The Idea was formed on sketch and further developed into realization.

The original frontier triggers. The conflict between upper incline boundary and lower grid invokes a central core figure which contains a small office function. The fitting room integrated with mini storage forms another volume occupied the unfavorable corner with two existing columns in a close range, and further intensify the conflict by extending downward.

The entrance has its importance. The area is at the corner of L-shaped street waits for both wayward attention. The feature condensed into an incline interface merged with the cabinets and develop onward with a gentle curve, forming the entrance with obvious guiding.

The conduction above defines the linear sequence required since the very beginning, giving the inner space a precise characteristic of folding.

Several geometric shapes hang by wire illuminate mildly, simulating the floating intention. The cross-shapes at the outset and destination are NOT any holy instrument, but the “plus” which is the most basic calculation in mathematics. Their participation was for the synesthesia, linking the spatial awareness to mathematical thinking. Also, both “plus” are trying to build up a loop of experience along the sequence with slightly recreational pleasure at both ends, though in physical world within a minor distance.

Circle followed up, with the most famous irrational number and character of tenderness, clarified the entrance area alongside the gentle curve. Then there is the stable triangle, strongly indicating the next direction. Five cubes in row transmit the space in to the square area formed by the office core and service function volume. Any entity here could further deteriorate the access to the physical end nearby. There for, the square and “square” above gives each other freedom, assembling spatial conflict around. In the settlement, performance came along with square. The physical end near the square imitates a stage by a small elevation, with spotlight to the center indicating the “Mise-en-scène”.

By looking back at the point, the gentle curve recurs with the “plus” at the end of sequence. The moving intention enchants to the shape, creating a “mathematics in motion” anticipating the circulation. Stair shape awaits, which is the way up, revealing forward progress. 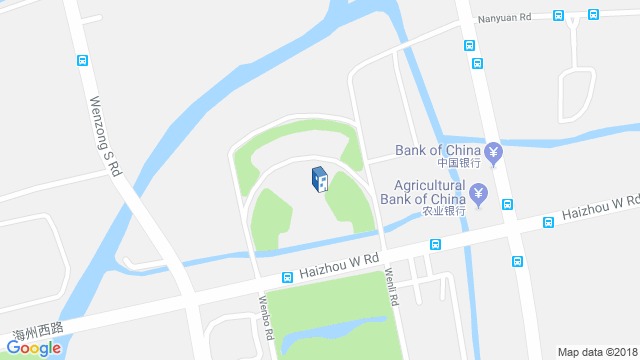 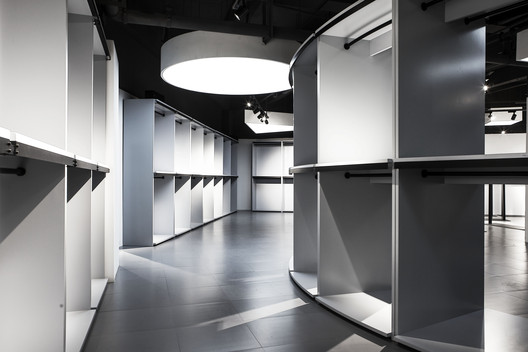