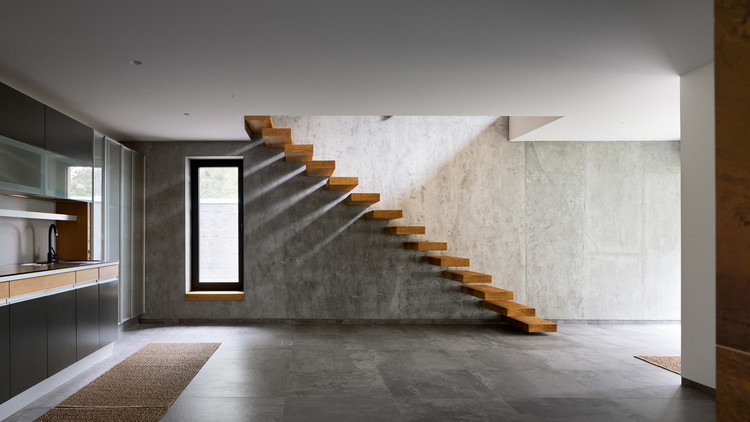 Text description provided by the architects. Project Heat 360 is a private house in Dnepr, implemented by Ukrainian studio Azovskiy + Pahomova. The architects had to transform a non-residential building in a cozy house, in which the hosts gladly would spend time, regardless of the season. Located on the picturesque banks of the river, surrounded by nature, where the air is clean and the sounds are beautiful, the residence of 180 square meters is made spacious and open, allowing you to enjoy all the pleasures of the environment and a sense of freedom that it brings.

The two-level structure that today is equipped with bath, a living room with a hayloft and a shower, as well as the "musical" bedroom is located lower than the main house where the owners live. Outdoor swimming pool and a small landscaped park with a wooden pier near the river unites two houses, which plays an important role in family life. Both the house and the area connected to a single smart home system.

To save the logical connection between the two architectural objects we have decided to use the panoramic windows and a terrace. The canopy over the entrance is made of shingles, and the panoramic window in the bedroom on the first floor plays a role of a large TV, which "translates" the nature all around the year. What is more, the house doesn’t have the TV, because instead of a blue screen the customers have an amazing view of the nature, fireplace and sauna. For example, for the best view in the common room the furniture deliberately oriented toward the windows.

We used natural eco-friendly materials. Supporting structures of the house are made of wood, the roof is made of shingle, repeating the slope of the relief. There is no drain. The water that flows down from the roof while it’s raining, creates before the panoramic windows a kind of waterfall, giving the interior an atmosphere of originality and a certain ethnicity. Falling from the roof, rainwater is divided on the round stones that serve as a retaining wall for the blind area near the terrace.

During the reconstruction of buildings any tree wasn’t cut, and the existing "construction lawn" stands authors skillfully integrated into the roof of the house and terrace. Between the pine trees, which are located in front of the house, the Japanese bath ofuro was designed.

Minimalistic style is dominated. One of the most vivid examples is a console staircase, which goes to the first floor. The decision to make the stairs without handrails motivated primarily by the desire of the customers, who took a responsibility of the security.