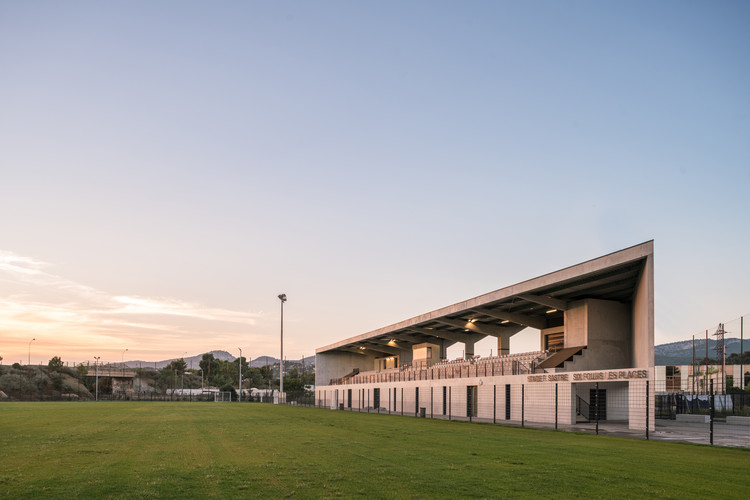 Text description provided by the architects. The Six-Fours-Les-Plages city’s sports grandstand project results from a sensible analysis of the surrounding context, allowing the formalization of an adequate infrastructure.

After analysing the data, the project brings a tangible answer to its immediate and future environment. A rough urban landscape, a city limit where many asphalt plots redefine urbanisation, industrial and commercial buildings, the project’s site offers quite an absence of architectural nuances.

In the middle of an urban landscape with no perceptible eye-catcher, the Sastre Stadium is surrounded by a railroad track and an overhanging suburban boulevard The plot’s situation seems quite rough, as if it had been developed in an residual urban space.

The entrance is quite narrow, stuck between the parking limits and the next-door plot. This bottleneck, unfavourable to flows of public accessing the stadium, will have to present an easy understanding of the grandstand. Discovering it from this crossing point will have to be orchestrated.

Once you enter the parcel, the site doesn’t reflet the perceived roughness. Built up against the SNCF railroad tracks, it offers a protecting feeling given by the natural embankment of boulevard De Lery while opening up on an distant landscape. A sense of intimacy including a vista on the faraway Côte d’Azur mountains skyline.

Facing this observation, the project plays with the site’s constraints and brings dynamism to the area by highlighting the place. The architecture project falls within its environment by reaffirming the values of an identifiable public equipment, and its role of centrality, gathering and meeting point. A buildling full of meaning, announcing clearly its values.

It thus offers a new image of the site, confering a new strong identity beholding the city’s intentions : Contemporary architecture becomes the vector of an urban renewal.
The building eases itself on the site, playing with the urban planning regulatory constraints, revealing its primary function : see, watch and protect.

Respecting the prospects at the limits (SNCF railroad tracks prospects) imposes the general shape of the opening. The grandstand forms the strong element of the project. Its volumetry is undertaken by its materiality of varying shades, due to the subtle shades dictated by the sun at different times of the day.

From the entrance, the grandstand is magnified. The perspective presents a dynamic volume, an open setting laid down on a resistant and solid foundation.
The South-West facade open on the field offers a vista frame that contrasts with the surrounding buildings.

This vista allows visitors to enjoy a direct view of the field, cutting out parasitic views, a spaciality concentrating the outlook on the field and the players.
The choice in materials also is the result of elements analysis so as to qualify them in both in terms of architectural aesthetics and assured durability.

The whole of the volume is made with reinforced concrete, presenting a rough finish inside as well as on the outside.Integrating insulation between exterior and interior facings in wall execution (GBE by Lafarge) allows thermal performance and construction sustainability.

At this level of sollicitation, sea spray and car pollution, the chosen facade material ensures optimal longevity amongst all materials with no maintenance needed.

The landscaping in the background reinforces the central readibility of the building. It creates a visual barrier thanks to the protected parking area (as well as accesses to sports and operating areas) by hiding the railroad track. The architectural project gives the tempo, the buildging assumes its establishement and its image.

In conclusion, the presented project summarizes all the contractor’s demands, corresponding to context, in order to formalise this volume opened toward the field and giving an increased outlook onto the playing zone, a true setting up for spectators and supporters of Six-Fours teams. 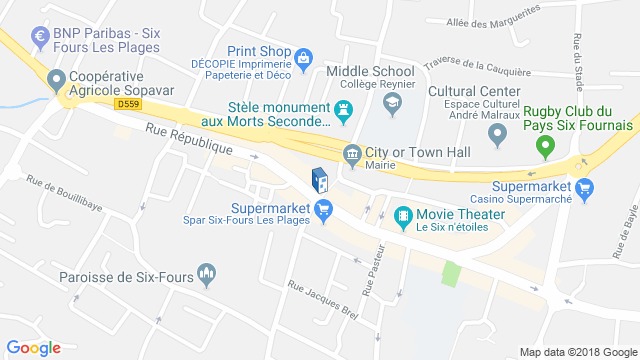