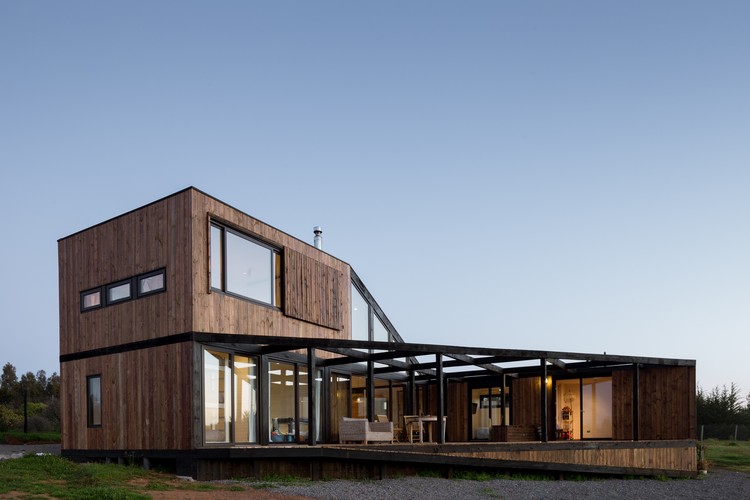 Text description provided by the architects. BL1 is a house for a young family that decided to move from the capital to the beach of Cáhuil. It is not a second home for resting or escaping during the weekends but the possibility of transforming their metropolitan lifestyle to a more informal and rural one, with a direct and constant contact with the natural environment.

Due to this, in addition to the traditional program of family rooms, common spaces and services, the house includes extra spaces for guests, a workshop/yoga room, a garage/logia/dressing room that can be used as a multipurpose room and an independent cabin for rent (BL 2 House)

The 5000 square meters site with no trees or other pre-existing elements has a direct but distant view towards the ocean coinciding with the west orientation. A predominant and steady wind comes from the south, and from the north only when it rains.

The project is organized as an "L" in plan. The east-west wing is built from a pre-existing container that blocks the south wind. The two-level north-south wing is completely built in wood. The point of connection between both sides defines the access, common spaces and through a deck the connection to the garage. Both ends of this "L" are connected by a diagonal terrace and a system of pillars and beams projected from the house protecting it from the sun while allowing the domestic program to expand to the outside.

To optimize time and economy the house is built with the least amount of details and only based on the construction systems usually used by local builders.